Rattling along the dusty, stone laced riverbed, our jeep suddenly skidded to a halt. After an hour of being bumped about in the back of the 4×4, our driver surveyed his options.

Directly in front of us, a flowing river cut across our route to the start of our Mt Pinatubo tour. The loose rocks and stones we’d been travelling over for the last hour slipped down into the flowing water below us. Revving his engine, our driver suddenly edged the jeep forwards, and splashed down into the river – there was no turning back now!

The Beginning Of Our Mt Pinatubo Tour

We’d arrived a day earlier, heading North from Manila to the small village of Santa Juliana, a small town located near the base of Mt Pinatubo. It’s possible to take a day tour from Manila, but we would recommend getting out of the city for a couple of days, and taking the time to relax near Mt Pinatubo. We used Santa Juliana as our base for the next few days, as a starting point for our Mt Pinatubo tour.

After a good night’s sleep, it was time for our Mt Pinatubo adventure!

We began our bumpy, bruise inducing Mt Pinatubo tour early, rising for breakfast at 6 before leaving our homestay at 7. After breakfast, we clambered onto the back of our open top jeep, and headed out along the village road towards the vast, dry bedrock of the nearby river. 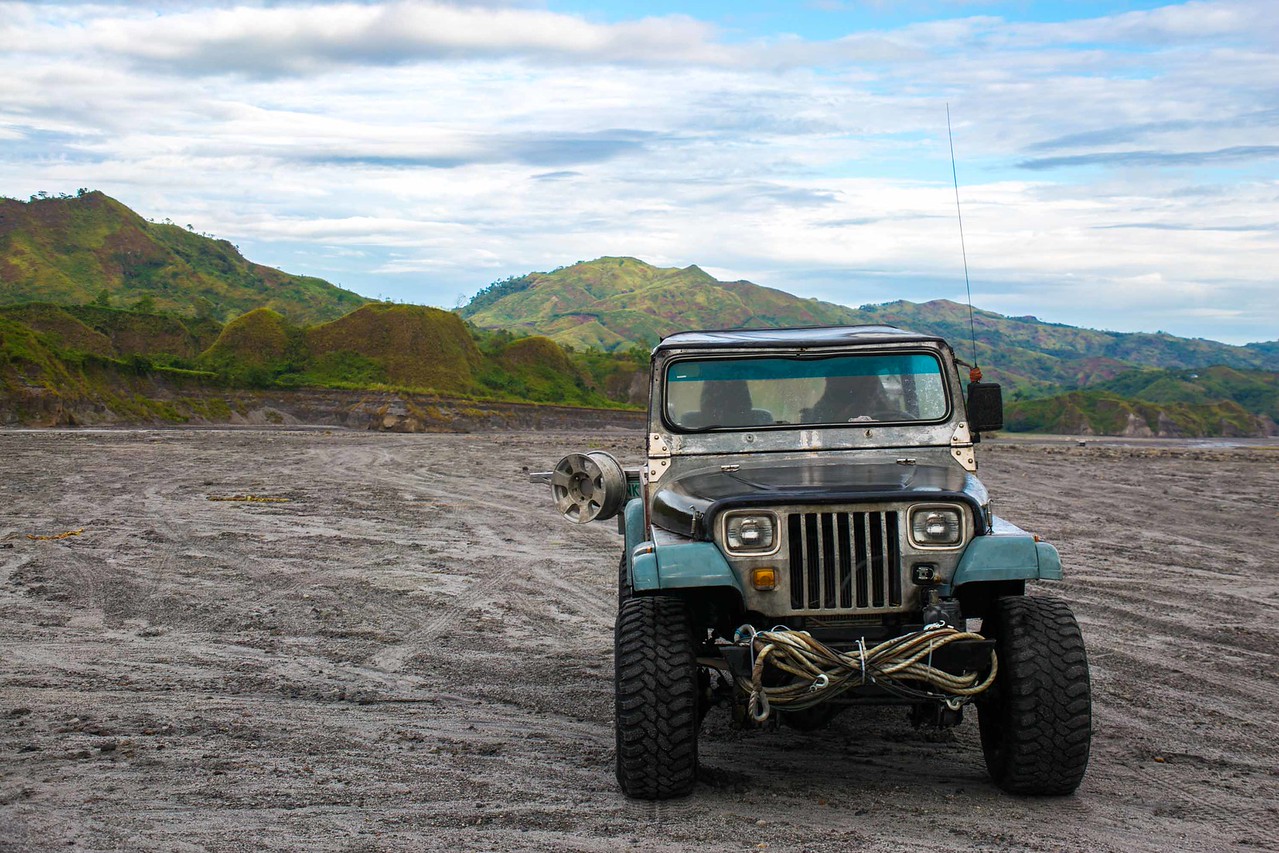 After a few minutes, we swung off the road and down the embankment to the riverbed, where we would spend the next 1.5 hours being jolted about, splattered with mud and covered in dust as we made our way to the start of our Mt Pinatubo tour. It was an exhilarating journey! 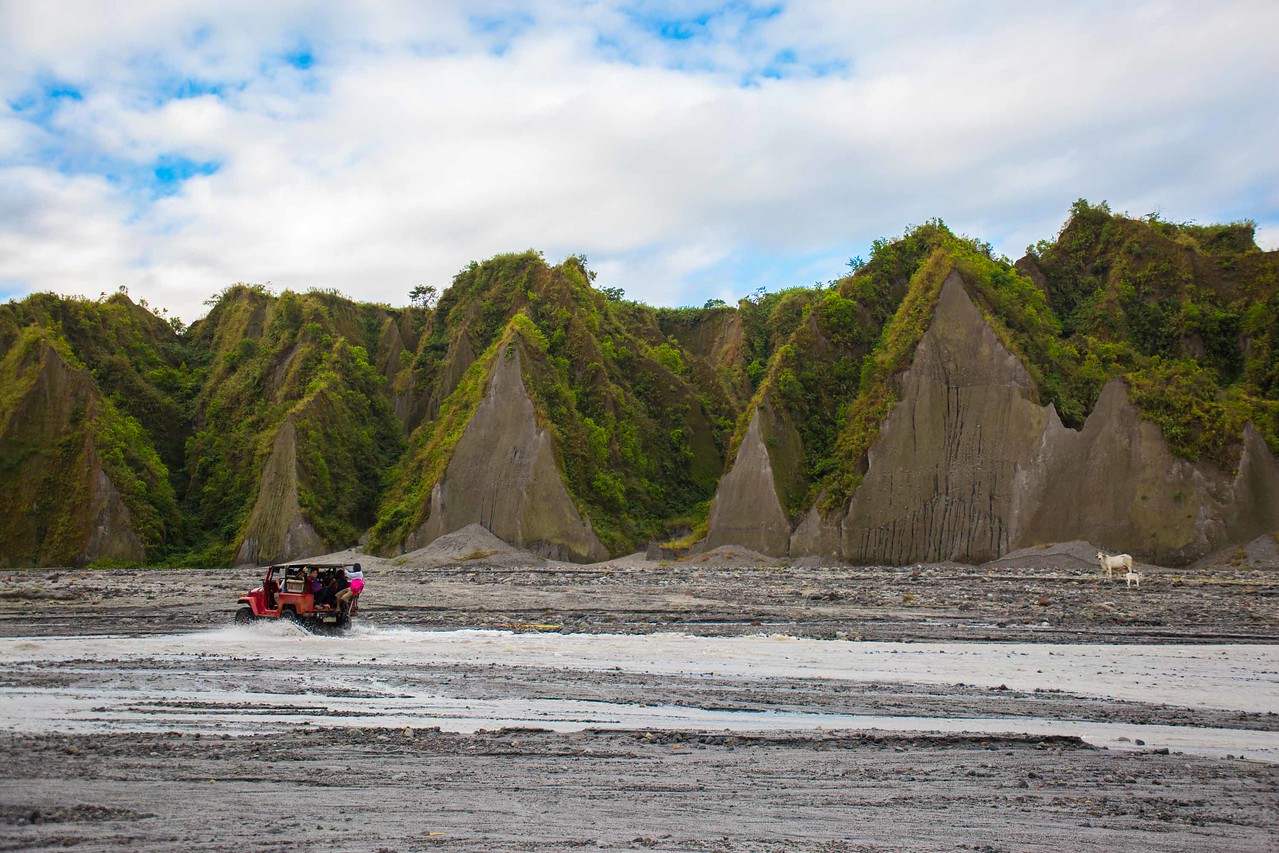 Despite the uncomfortable ride, the landscape on our jeep ride was breathtaking. Magnificent rock formations jolted out of the ground around us, the dark grey stone brought to life by the lush green vegetation and trees that has somehow found a foothold in the crevices. We admired the scenery as we perched ourselves on the bench on the back of our jeep, hanging on by the metal frame around us. Luxury this was not! 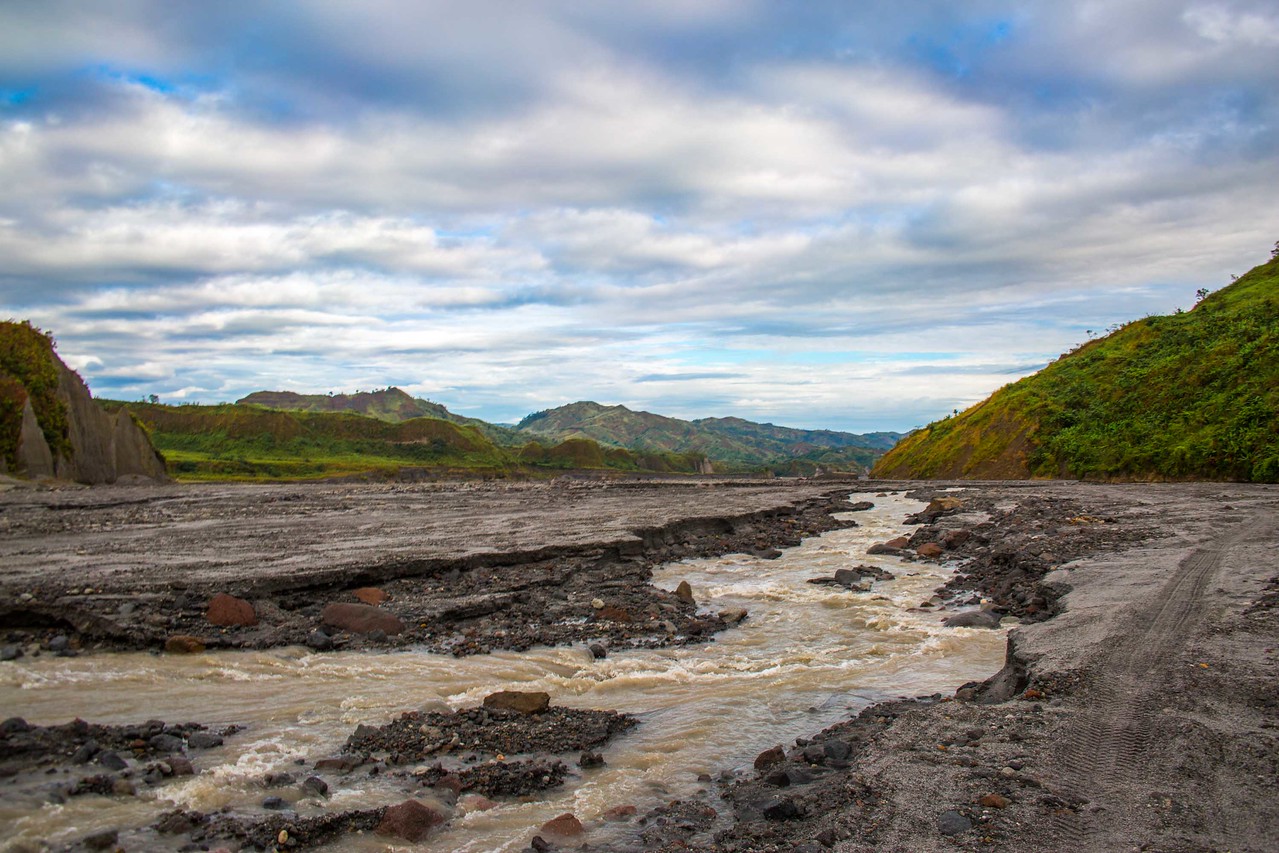 Instead of going straight across and up the other side of the river, our driver swung the jeep to the right and started driving straight upstream! Surges of water splashed across the windscreen, and our backs splattered with mud as we made our way upstream. This was to become the norm as we made our way on our Mt Pinatubo tour.

As we made our way closer to the base of the volcano, the landscape became more and more incredible. We had begun our journey surrounded by white and grey rocks, but as we got closer to the base of Mt Pinatubo, the grey gave way to lush green hills.  The green landscape rolled around us, punctured every now and then by sharp grey jagged peaks as the surrounding hills slowly eroded away. From the wide expanse of the river at the beginning of our journey, the valley narrowed as our driver navigated through the ancient lava flow/river bed. 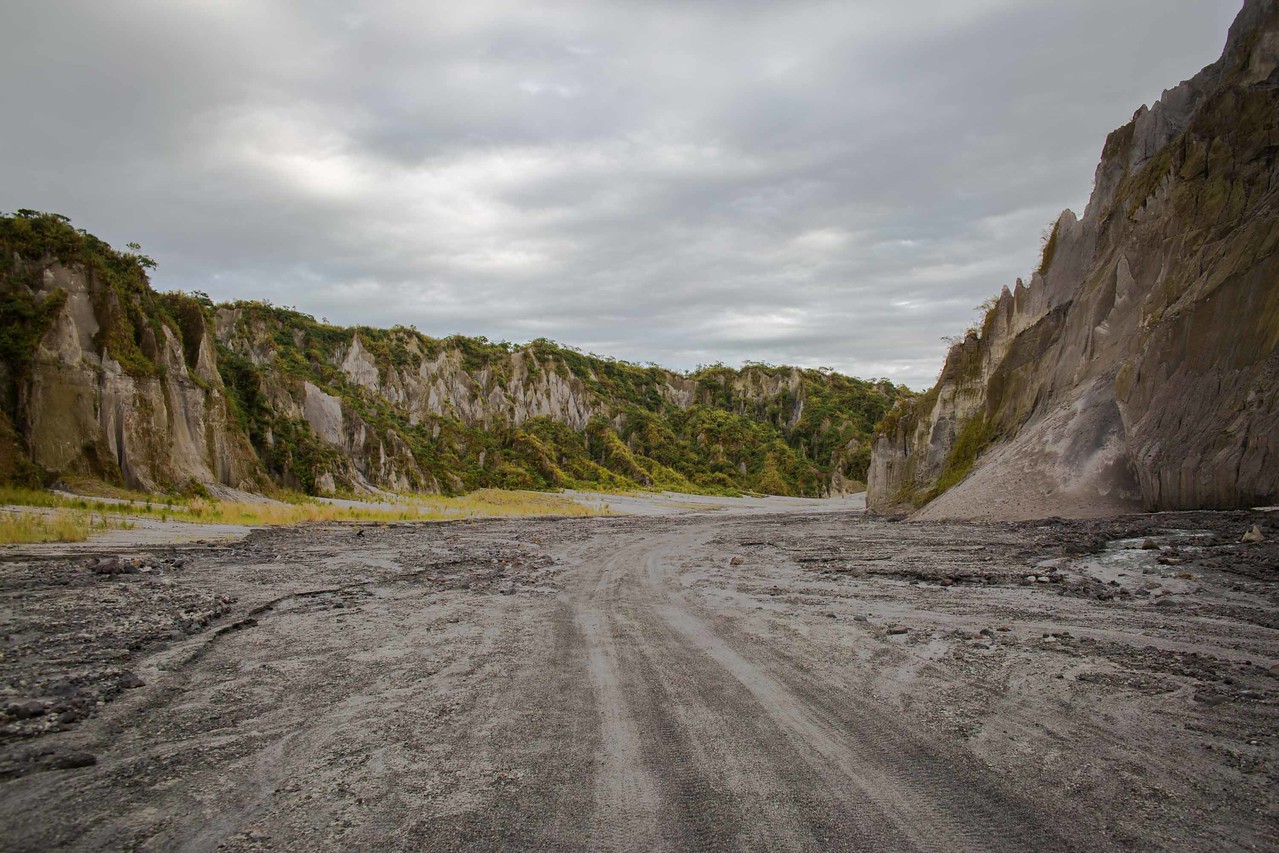 Every now and then, we’d stop to let the engine cool down, and in the distance locals would appear from nowhere, eager to say hello and share a high five with us. As they approached us, the scale of our surroundings became apparent, our new friends a mere spec on the magnificent canvas laid out in front of us. This place was epic. 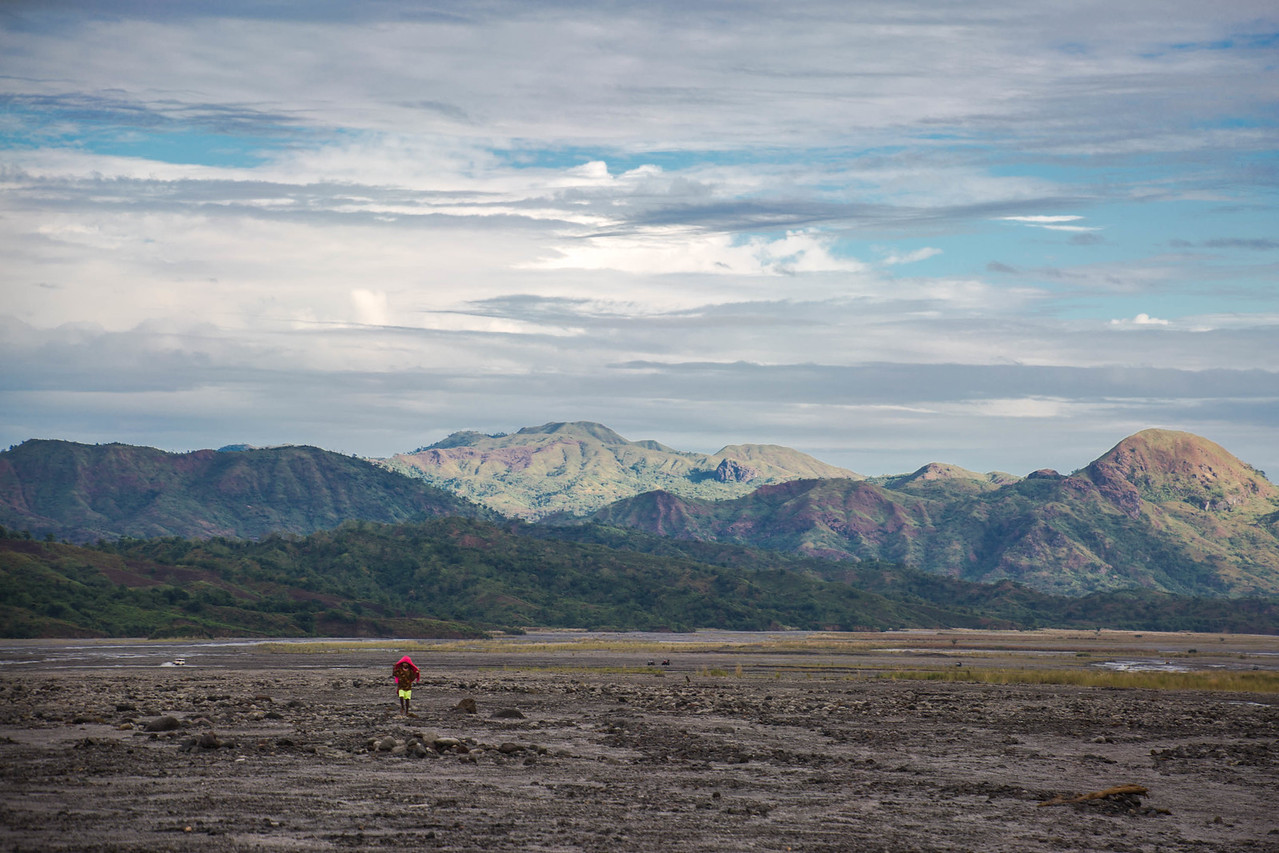 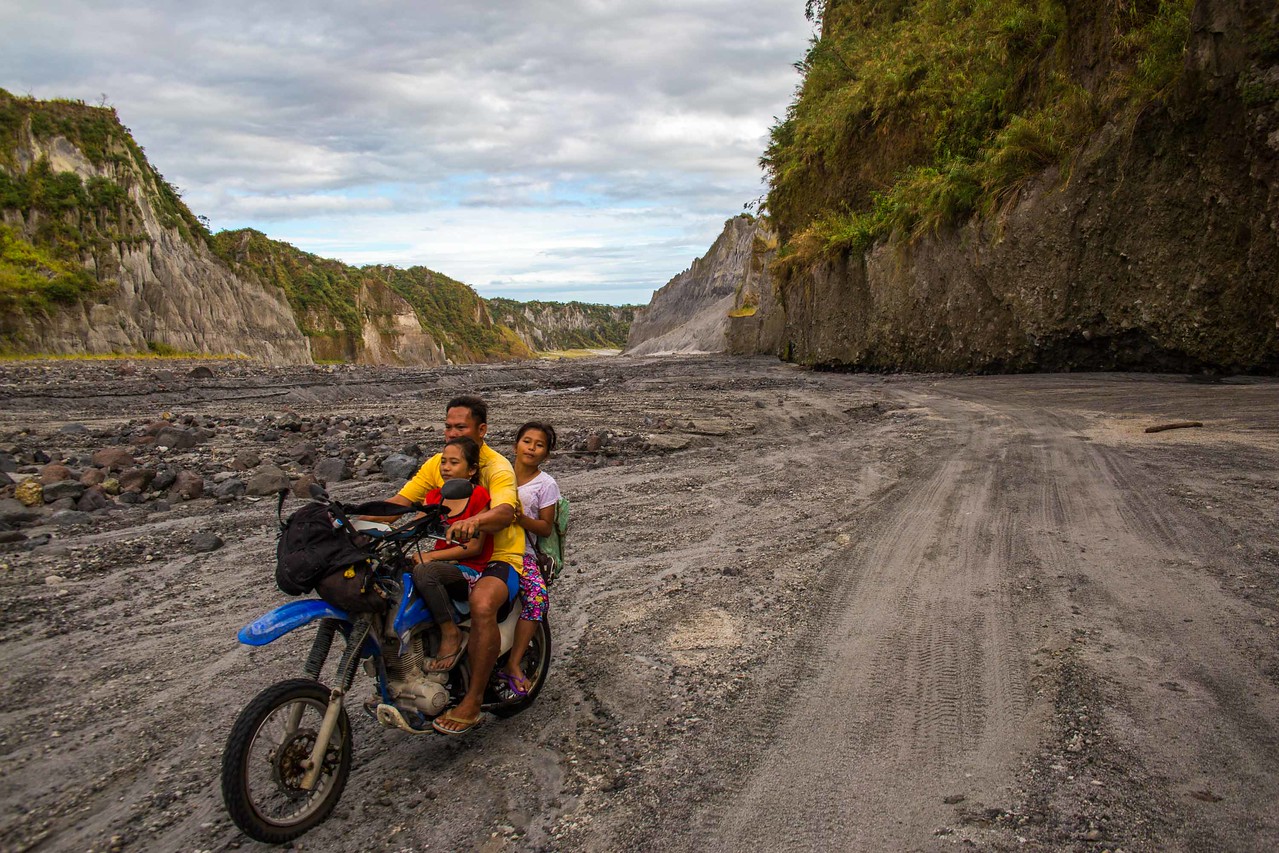 After an hour, we rounded a bend and got our first glimpse of Mt Pinatubo, and what a sight it was! Layer upon layer of rock and stone gave way to rolling green hills and then, in the distance, Mt Pinatubo. 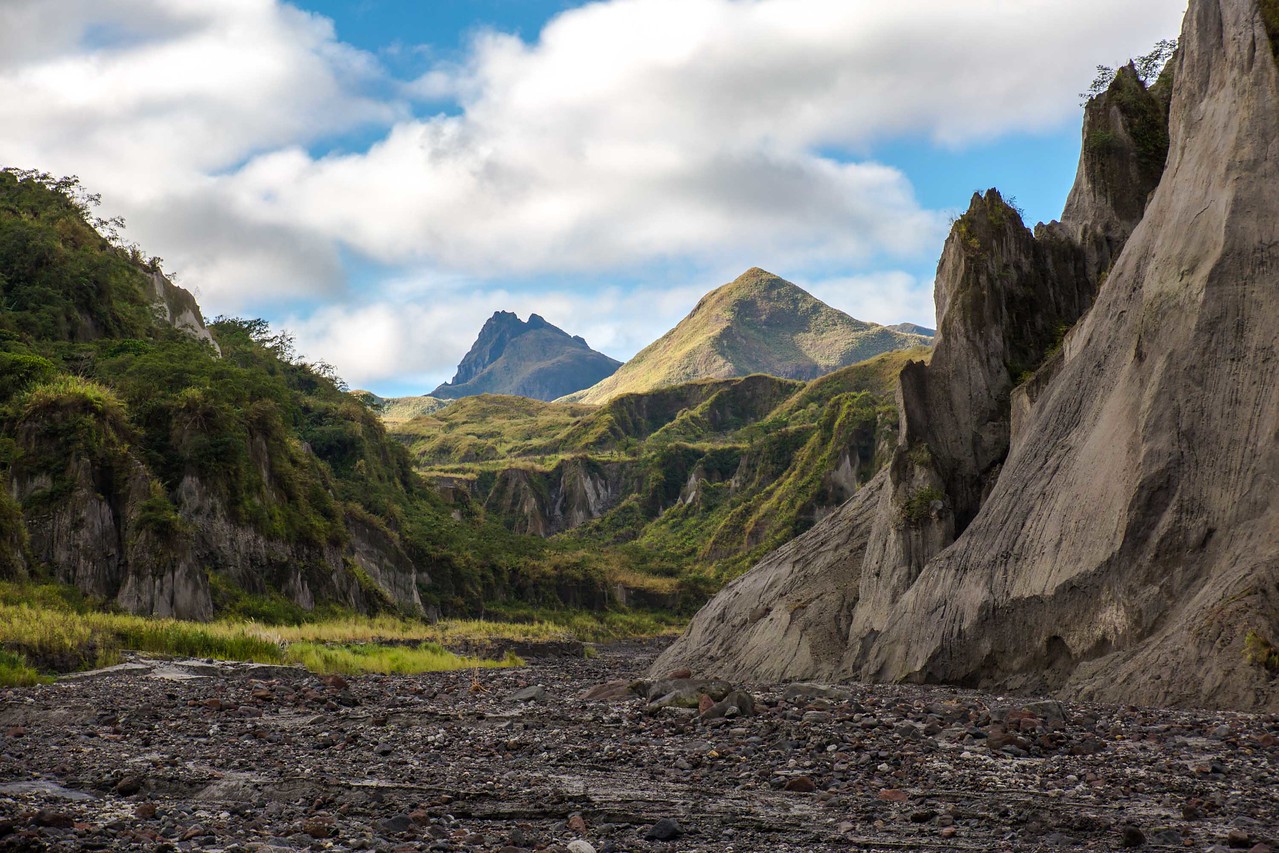 Finally, after an hour and half, our jeep pulled to a stop and we jumped out. After a few minutes of twisting our necks back into place and getting our bags organised, we began our trek. Ahead was a fairly leisurely 2 hour climb to the crater.

The trek itself was beautiful, again the landscape changing from grey valleys, to lush jungle as we closed in on the summit. We clambered over small rocks, and jumped across streams on our way. In our opinion you would only need a basic level of fitness to complete this trek.

After a couple of hours, we finally reached the crater, and what a view it was! We were blown away. The caldera of the volcano is huge, spanning 2.5km from one side to the other. The rugged, steep and unstable crater wall surrounds a deep blue lake. As we got closer, the lake stretched out into the distance in front of us. We sat down on the waters edge, and admired the view and tranquility. It was breathtaking, and reminded us of our epic Mount Rinjani trekking experience in Indonesia. 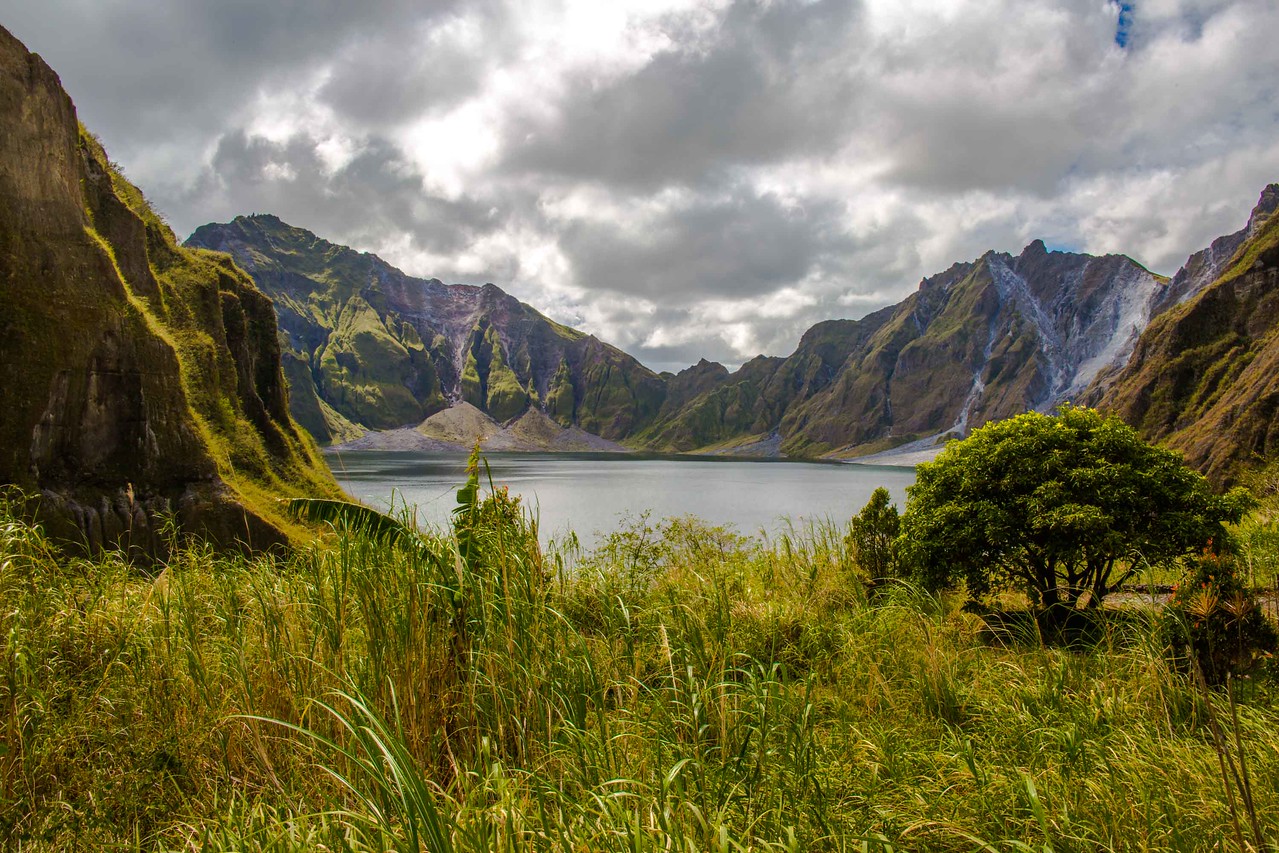 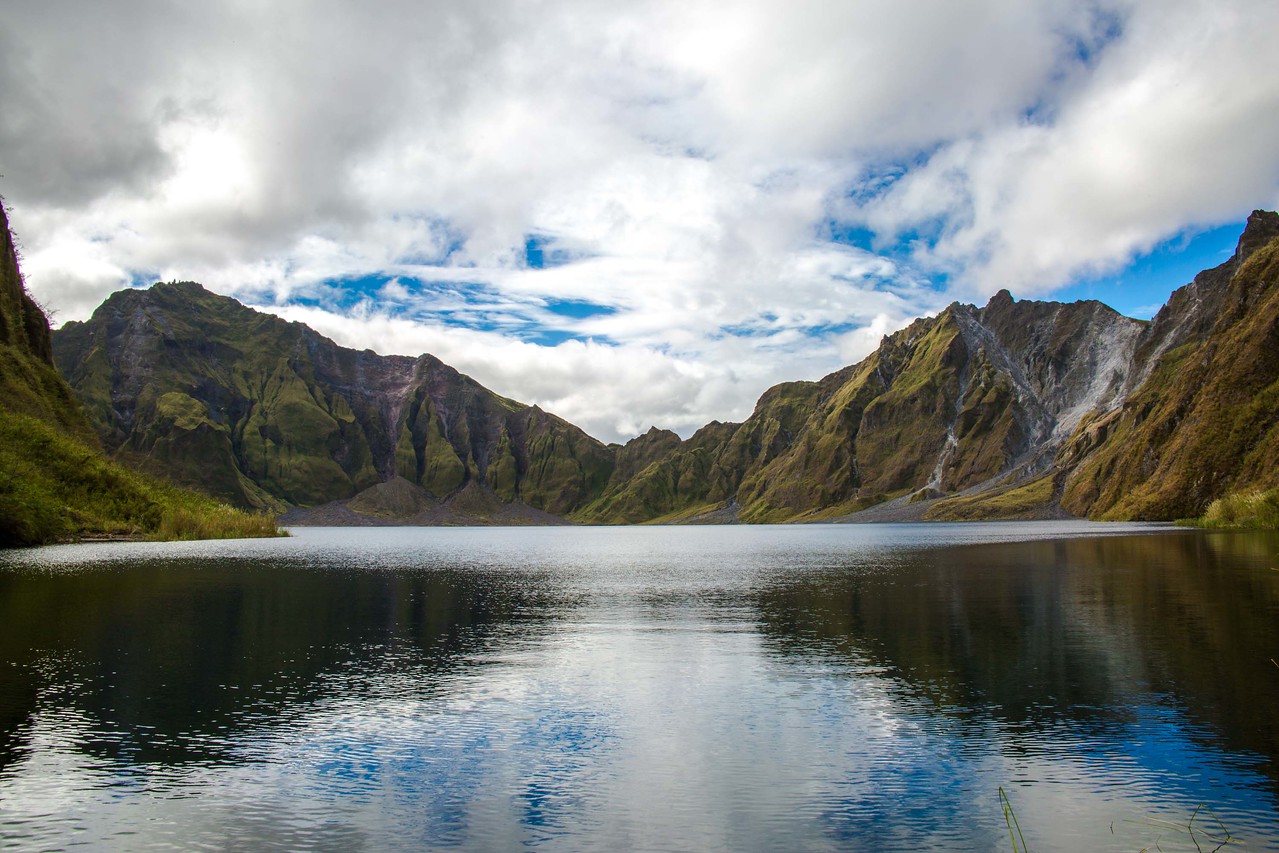 As we ate our lunch, suddenly a huge explosion was heard to our right! If there’s one thing you don’t want to hear when you’re sitting in a volcanic crater, it’s the sound of an explosion! Thankfully, this noise was from a rock fall on the ridge and not the volcano ‘waking up’. Phew! Incidentally, the last eruption of Mt Pinatubo in 1991 resulted in it losing 260 metres from its summit!

After an hour relaxing and taking in the view, we began the leisurely descent back down the volcano. The scenery again was incredible! 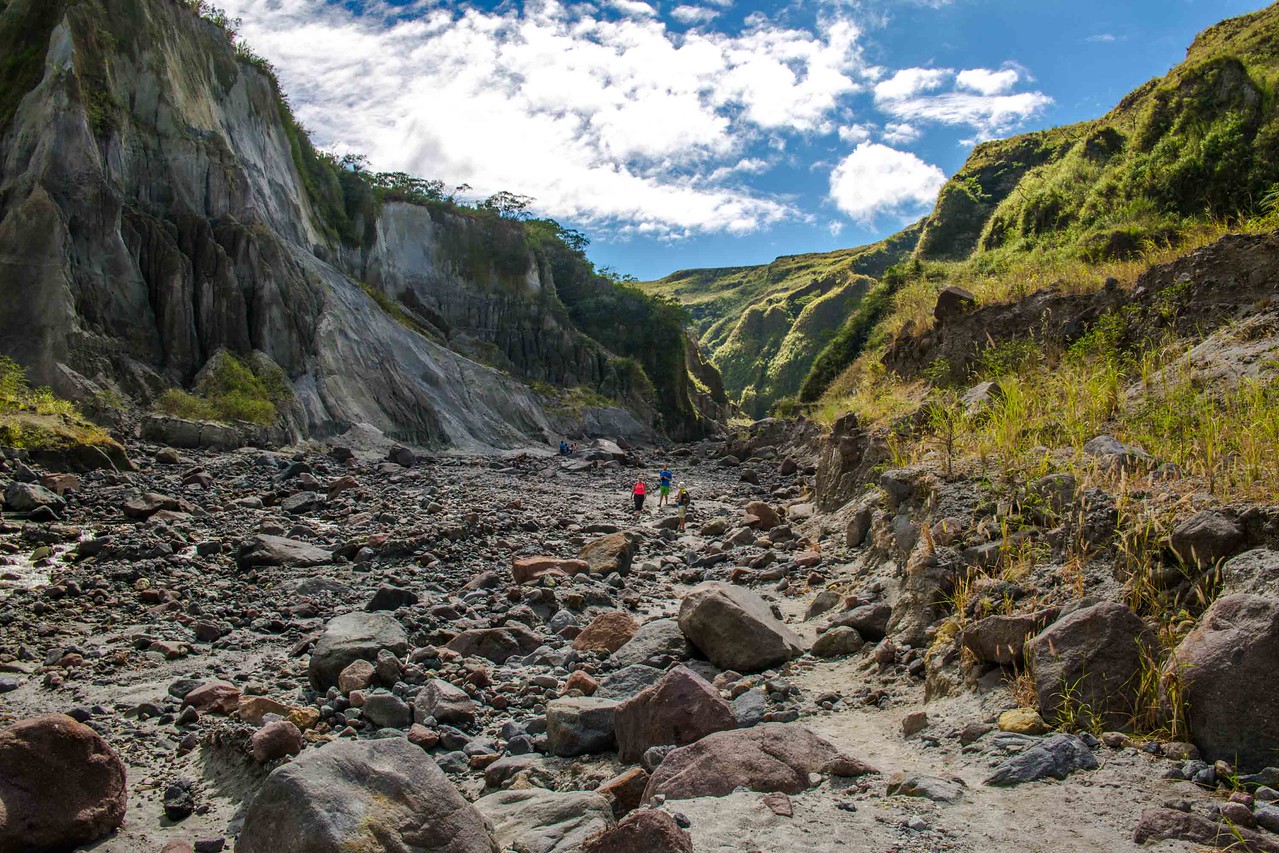 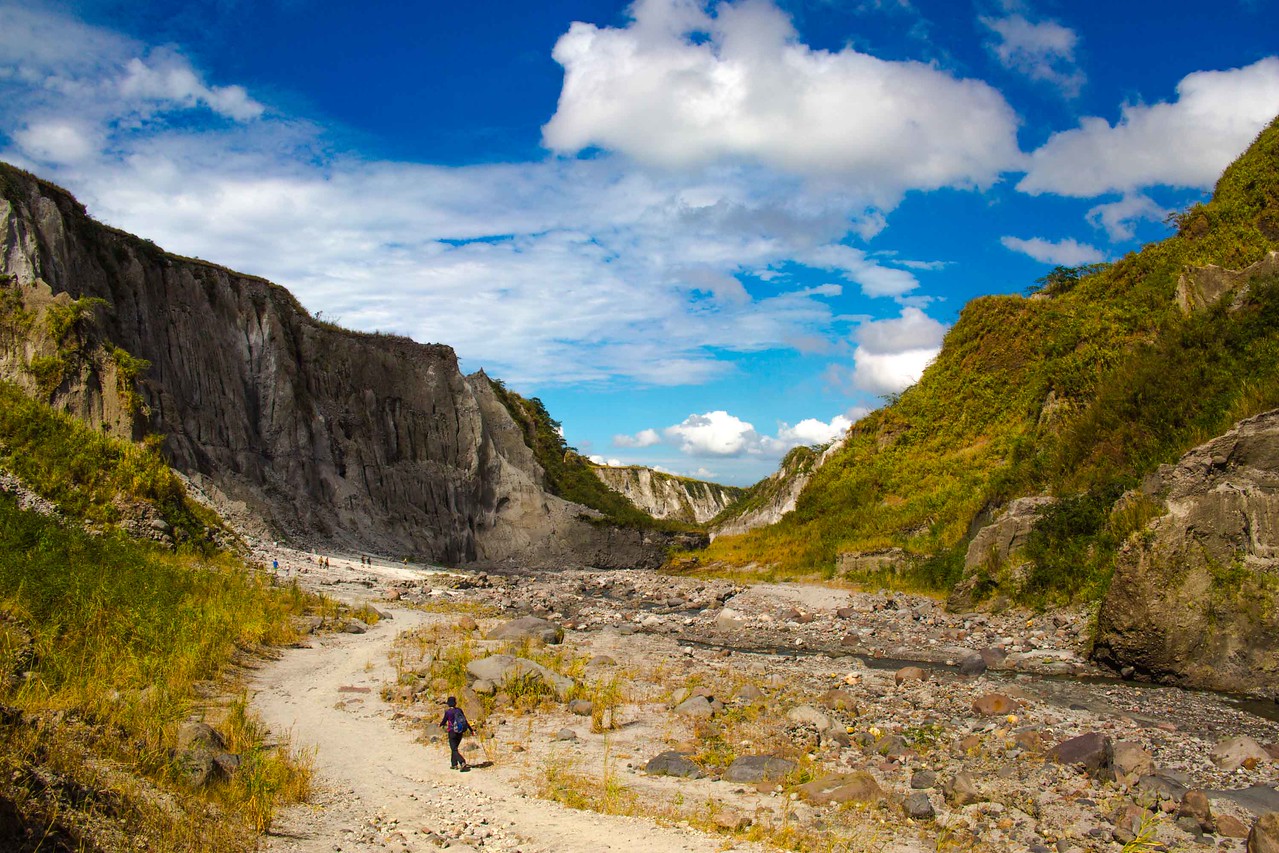 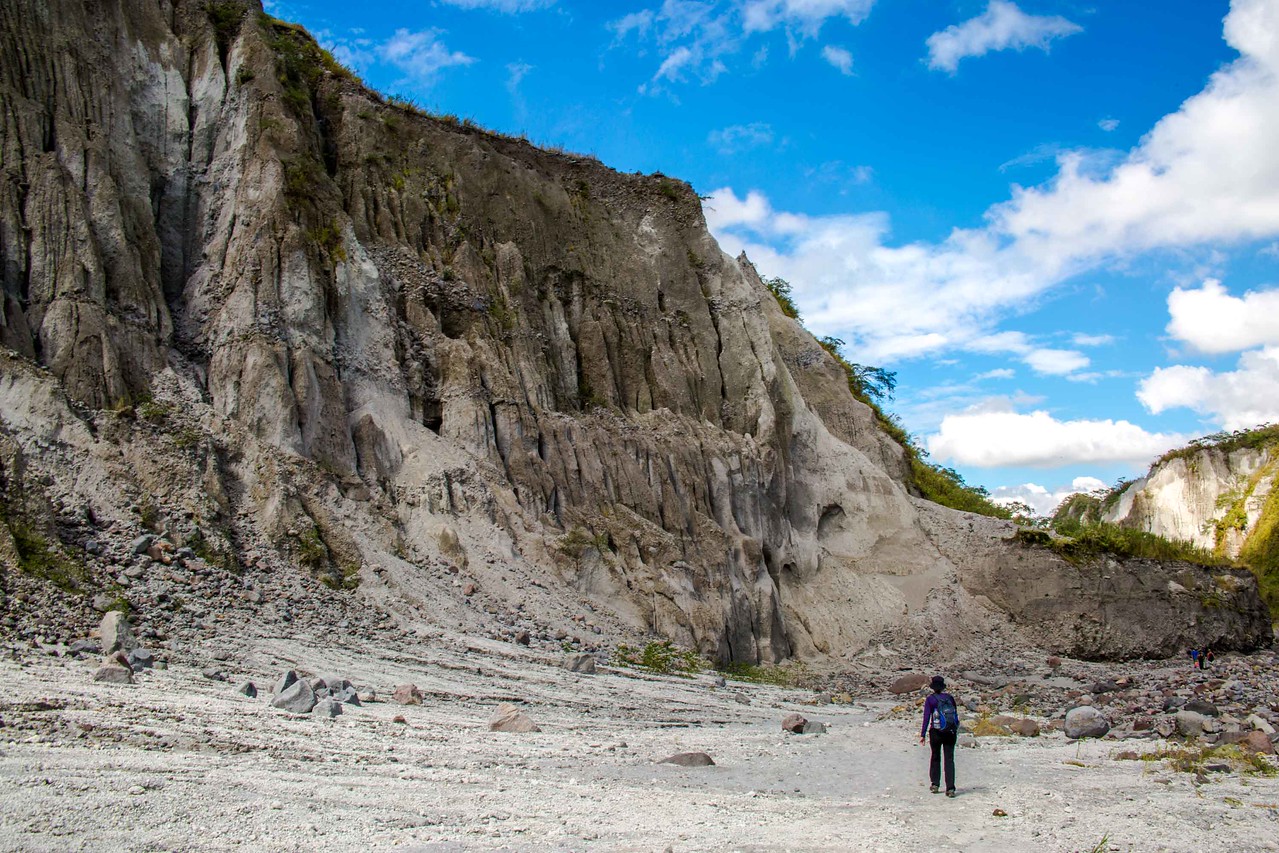 We made it back to our jeep, and began the bumpy journey back to our homestay. Hanging out the back of our jeep, the views looking back towards Mt Pinatubo were just as incredible!

Later that evening, still tired from our trek, we took a short walk up the hill near our homestay to watch sunset. Again, the scenery was spectacular and we got a sunset to match! It was a spectacular end to our time at Mt Pinatubo.

Our Mt Pinatubo tour was one of our highlights from the Philippines, and easily one of the most epic things we saw there. Despite the bumpy jeep ride (which adds to the excitement), the scenery and landscapes on offer are incredible. The trek to the summit was easy for us, and well worth it for the views of Mt Pinatubo crater. If you’re visiting the Philippines, we’d highly recommend a visit if you have time!