From San Pedro To Uyuni – The Bolivian Salt Flats!

After a surprisingly good night’s sleep in our basic dorm after our first day of our jeep tour, and a dose of coca tea for breakfast to prepare us for another day at high altitude, we set off at 8am for day 2 in our beloved jeep! What did we have in store in today? Well mostly a LOT of driving. It was a long way cross country to reach our final destination close to the salt flats. Although there was less to see today compared to days 1 and 3, we had our unique accommodation to look forward to at the end of the day…a hotel made of salt!

Day 2 involved traversing an incredible variety of terrains, from barren desert to lush green countryside with a wealth of wildlife, lakes and streams. We even passed through a few towns en route – first civilisation we’d seen since leaving San Pedro in Chile! The contrast was amazing.

First up on day 2 was the Siloli Desert, where we stopped to walk through a huge set of terracotta orange rock formations formed as a result of wind erosion. 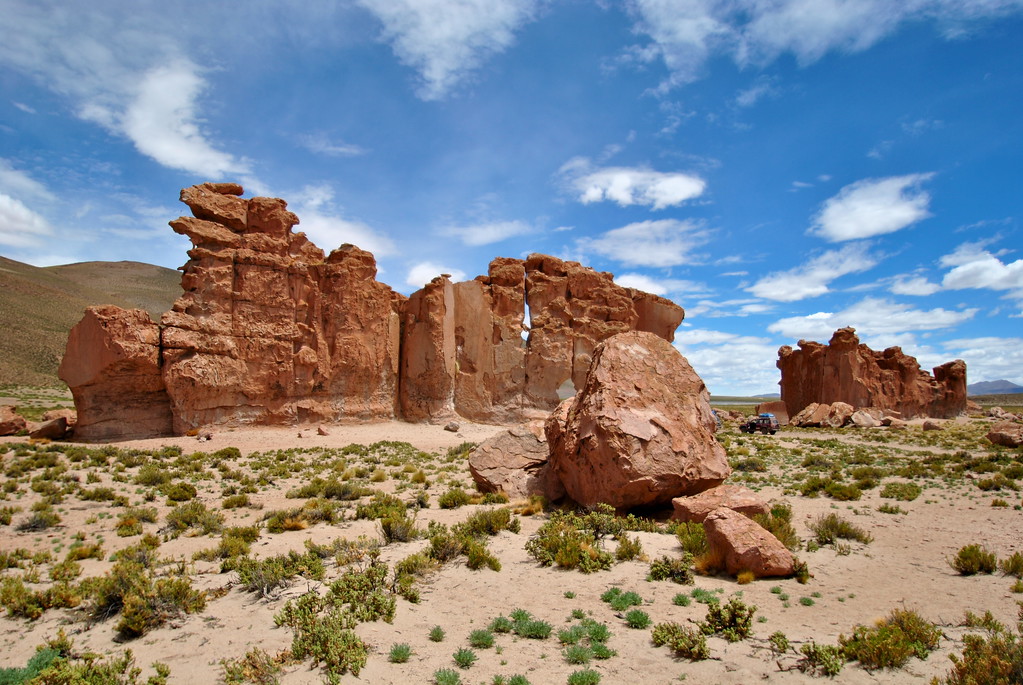 After stopping to view some more high plain lagoons (Laguna Honda, Chiarcota & Canapa) we saw our first lush countryside of the journey and said hello to a few of the locals… 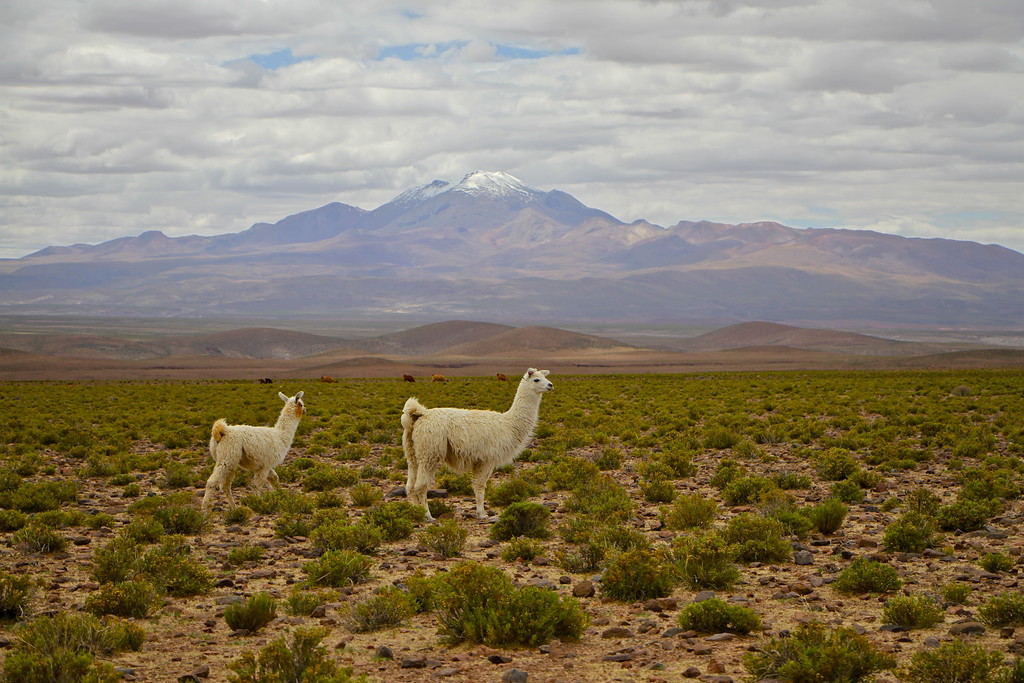 After navigating through some rough terrain and not so shallow streams, I suppose it was just a matter of time before we’d run into some jeep problems…

With the other 2 jeeps already having had a change of tyre and some overheating issues, we were a little smug that our jeep had avoided any such issues thus far. But alas, it was our turn! Only problem now though was we were out of new tyres! Luckily this happened when we were close to one of the few towns on the way, otherwise we’d probably still be there now! 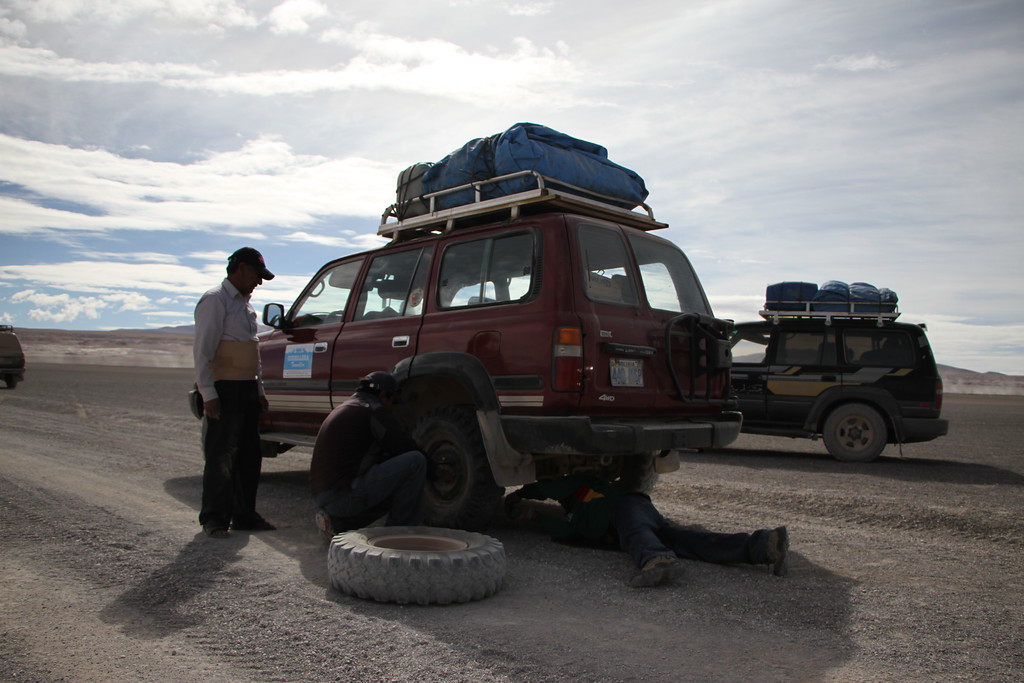 Getting ever closer to the salt flats, our final destination for day 2 was the smaller but beautiful Chiguana salt flat. It was nowhere near as big as the Salar de Uyuni which we would visit on day 3, but gave us a great flavour of what we had to look forward to! Chiguana is particularly unique however as its vast white plain is interrupted by a railway line. For us it looked like a road (rail?) to nowhere, but apparently this railway line stretches all the way from Uyuni in Bolivia to Calama in Chile – amazing! 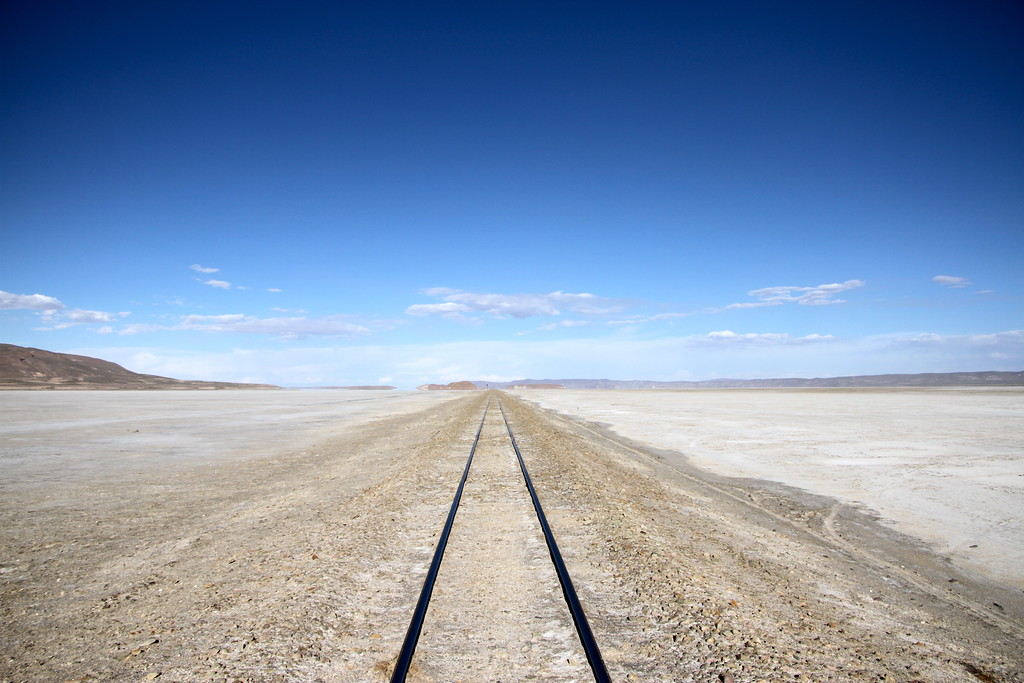 After another long day in our beloved jeep, we finally arrived at our salt hotel, our unique home for the evening! Yep that’s right, everything you see here (except the ceiling and decoration) is made of salt – amazing! Of course Barry couldn’t resist licking the wall just to check! 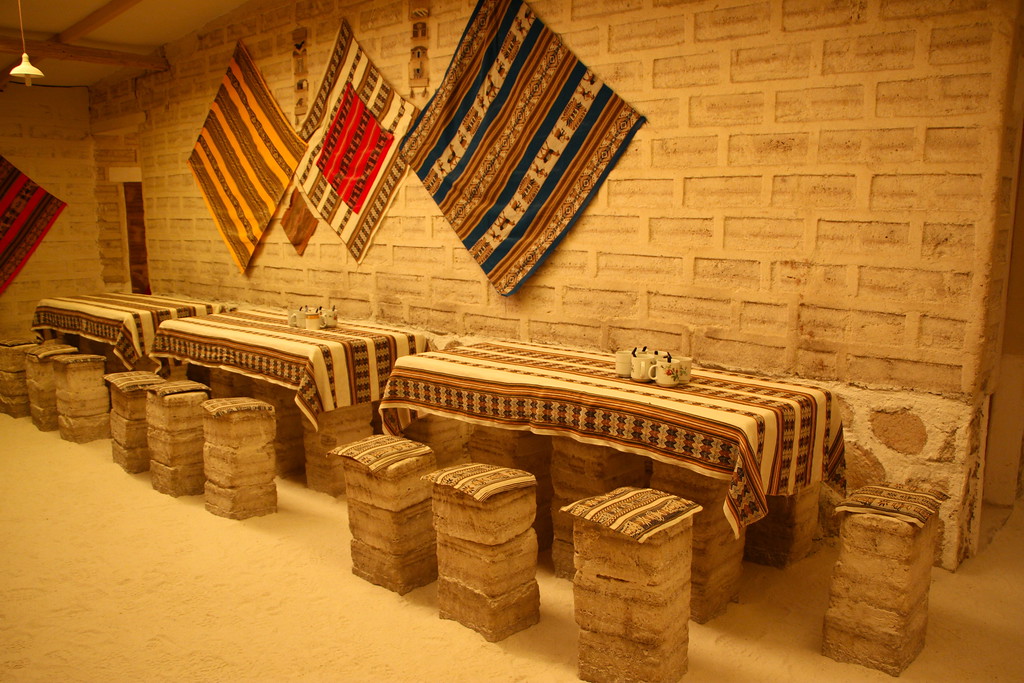 The next morning we set off early towards the salt flats. After driving for 2 full days through the Bolivian altiplano, it was finally time to reach the smoothest terrain of the journey! I’ll never forget the first few minutes of reaching ‘Salar de Uyuni’. It was as if we’d entered another world, so vastly different to where we’d been over the last 2 days. It was so smooth, driving over it was almost serene. 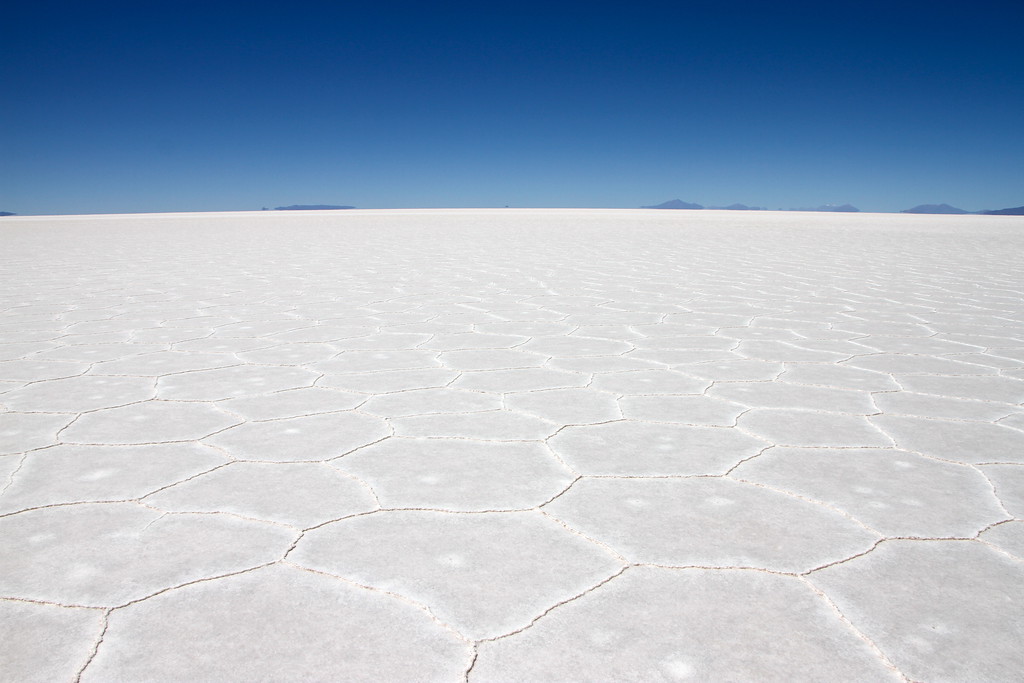 Our jeep went completely silent as we cruised across the vast whiteness. For the first 20 minutes or so, all we could see was the salt flat stretching for miles and miles to the crest of the Andes mountains in the distance on one side. On the other side, nothing, only salt flat forever! The unbelievable enormity of its 10,582 square kilometres (4,086 sq miles) size became real. 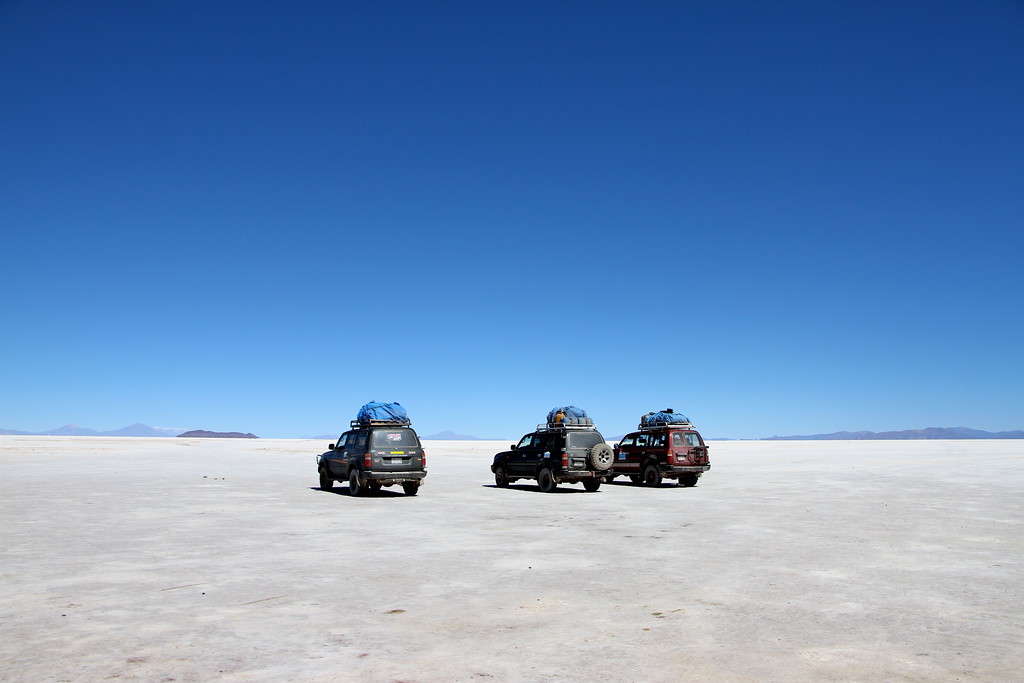 After around half an hour of driving, we reached Incahuasi Island, a rocky outcrop of land that rises out of the centre of the salt flats. Now this was unexpected! 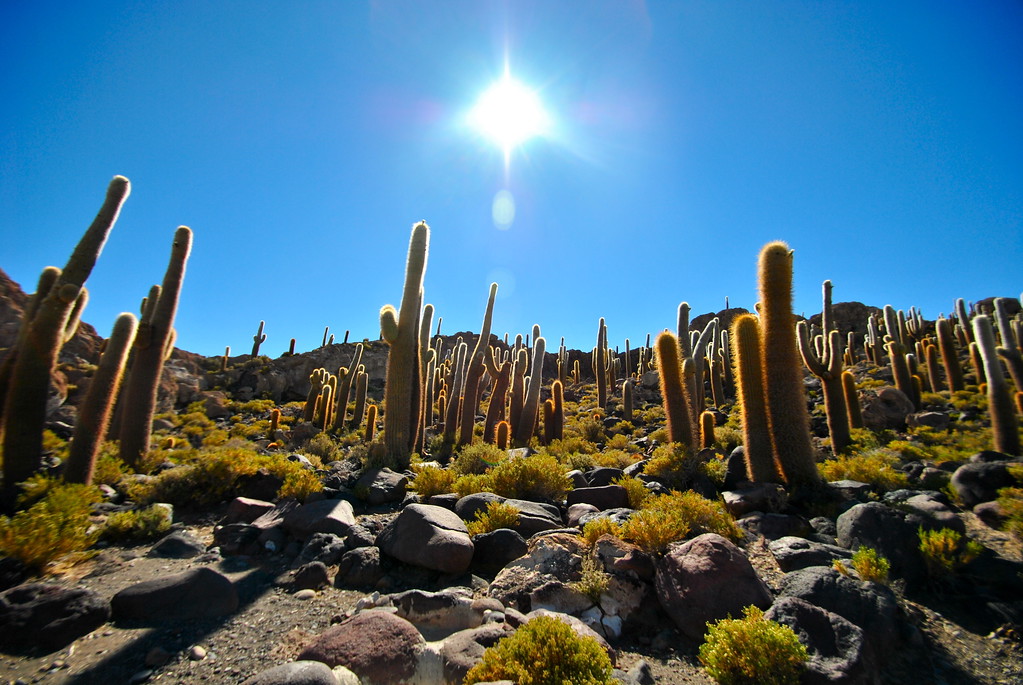 After exploring the island, it was time to stop at a beautiful desolate area of the salt flats and check them out for ourselves. After some time spent appreciating the landscape, we couldn’t resist trying to capture a few quirky pics! 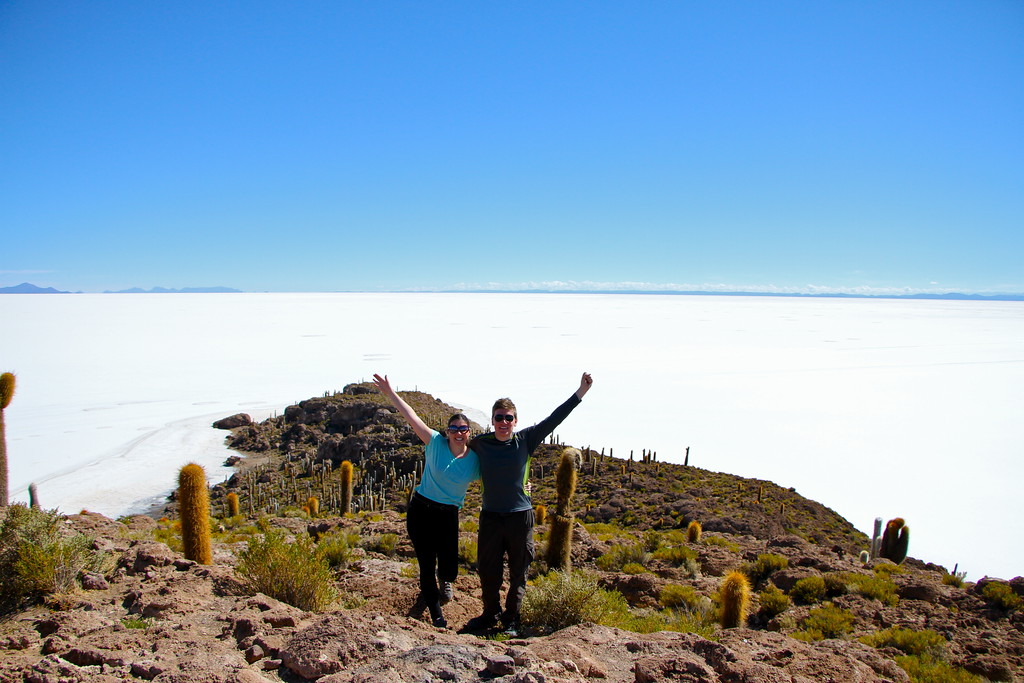 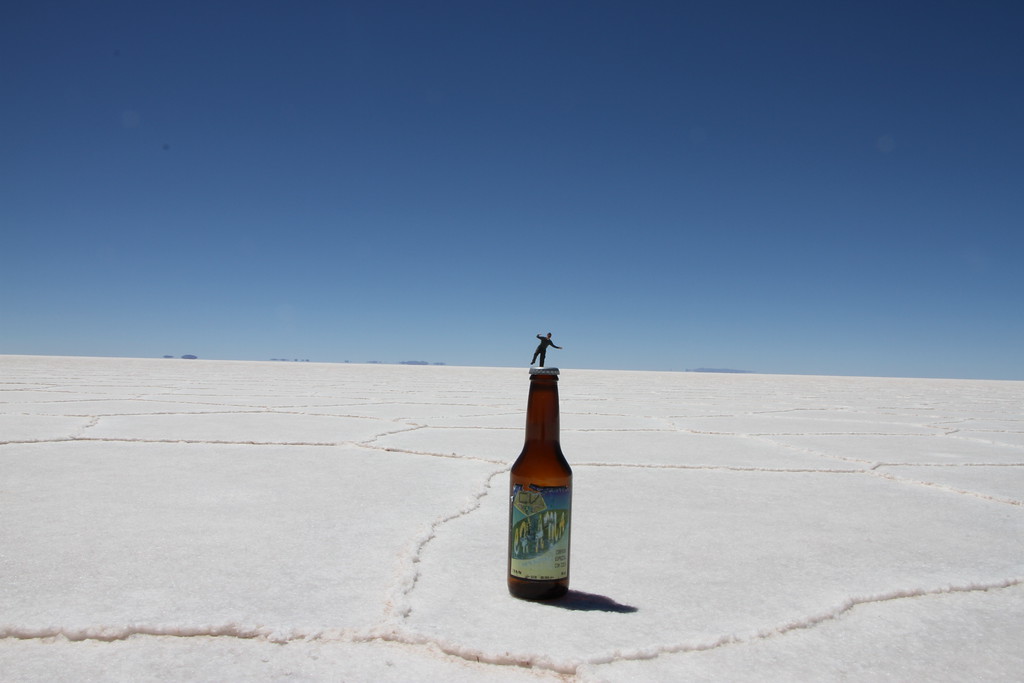 Our tour nearing completion, we departed the salt flats and had just enough time to make one final stop at the famous train cemetery near Uyuni… 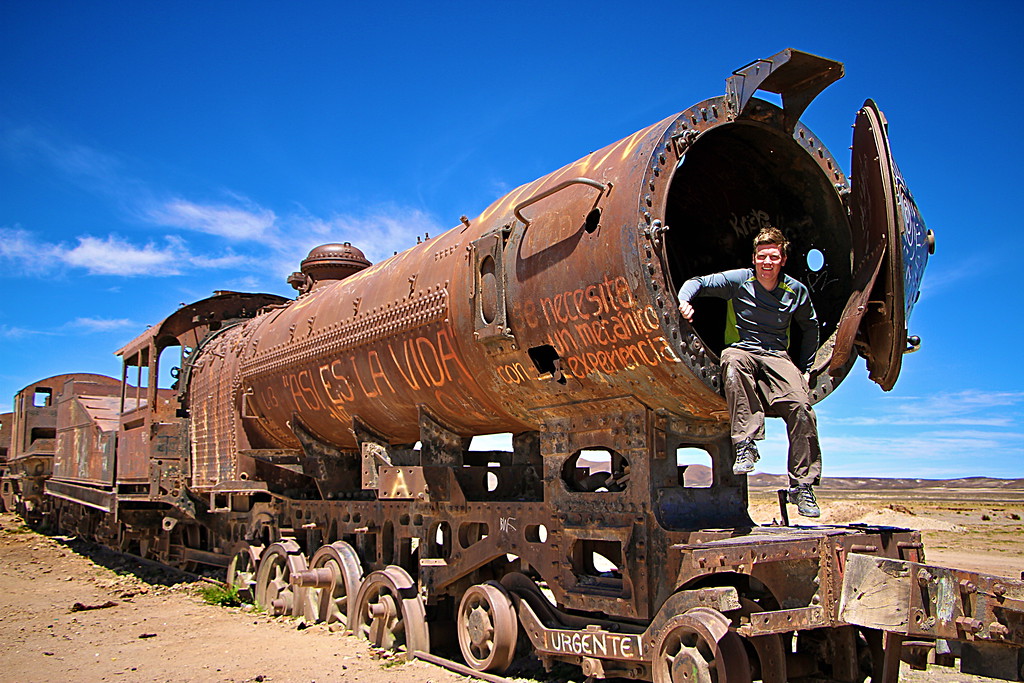 And so our great adventure across the antiplanos of Chile and Bolivia was complete! We’d travelled across dusty, bumpy and sometimes dangerous terrain seeing some incredible sights along the way. Arriving in Uyuni, we were relieved to finally escape the cramped conditions of our jeep, and finally have a shower to wash away the three days of dust we had accumulated!