5 Stunning Images Of Stargazing In Scotland

Here at Worldly Nomads HQ we’re very excited to share something completely new on the blog, our first ever guest photography feature!

We are lucky to call Scotland our home, a beautiful country with an abundance of incredible natural landscapes.

Capturing the night sky is a challenge, but thanks to our talented friend Stuart McIntyre, the man behind boundbystarlight.com, we’re delighted to share some beautiful images of the milky way and aurora borealis, set against Scotland’s dramatic landscape. So sit back, and enjoy this adventure through Scotland’s night sky, in Stuart’s own words.

5 Stunning Images Of Stargazing In Scotland

1 – The Crawick Multiverse & The Andromeda Galaxy 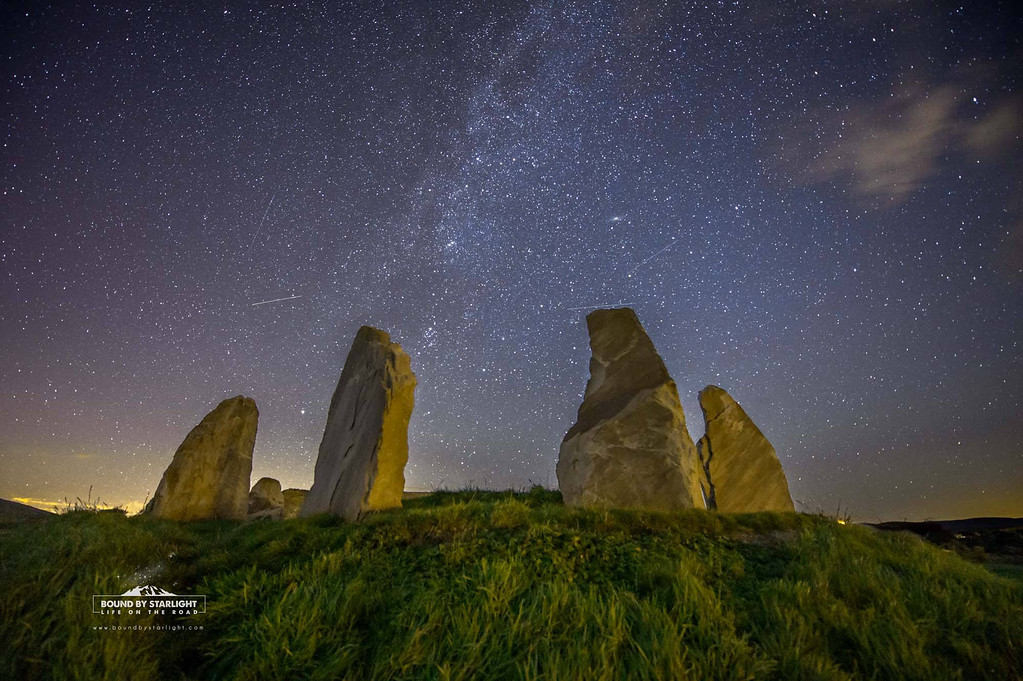 The Crawick Multiverse, near Sanquhar, Dumfries and Galloway (October, 2016)

First up in our top 5 is this spectacular and very cleverly composed image of the Crawick Multiverse. This standing stone circle, recently transformed from a former open cast coal mine into an amazing land art project in Dumfries & Galloway, is a representation of the Andromeda Galaxy. This spectacular image, cleverly composed by Stuart, also reveals the real Andromeda Galaxy in the same frame, revealed by Scotland’s beautiful dark night sky. We love it!

When did you start and what inspired you to photograph Scotland’s night sky?

“For me, it was a fusion of all my interests. I grew up on a farm in Aberdeenshire and had seen the dark skies many times and the beauty often obscured by light pollution. I also have a passion for imaging and trying to use new techniques to capture the best possible images so taking dark sky photographs was a natural progression for me. Once I started Bound by Starlight and found myself alone with only the stars for company, I discovered how truly amazing it is to go out and explore Scotland in the dark! It has a very different feeling, and it has all taken off from there.”

2 – The Aurora Borealis In The Loch! 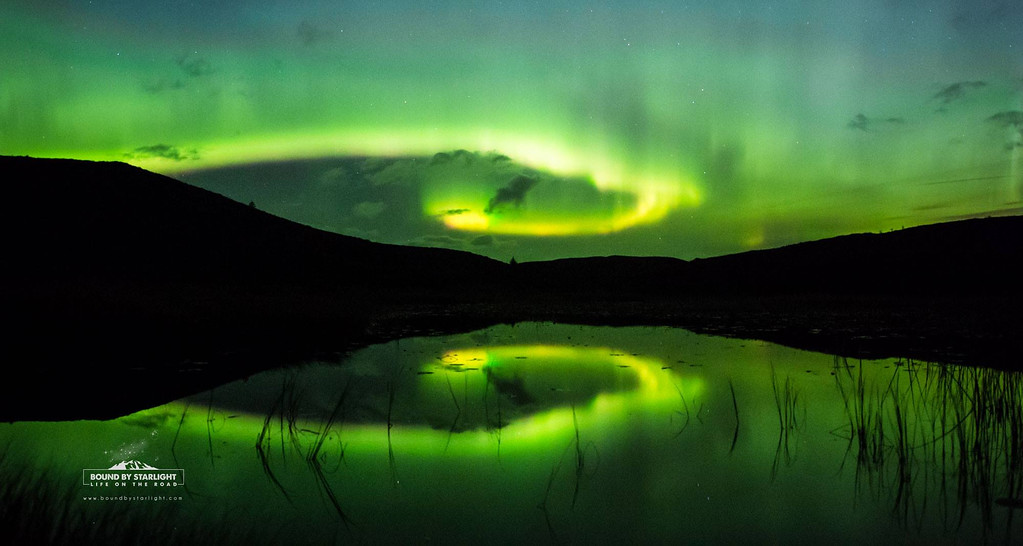 The Aurora Borealis near Glengarry, The Scottish Highlands

It’s images like these that make us want to explore our own lovely country MORE! This incredible shot, capturing the absolutely magical beauty of the illusive Aurora Borealis, comes with a great story. Taken on a cold October evening, deep in the hills of Glengarry in the Scottish Highlands, this image involved Stuart wading through reeds and getting knee deep in cold Loch water! Not only did it involve having to withstand the cold temperatures, Stuart also had to force himself to remain as perfectly still as physically possible in order to capture this stunning loch reflection. Hats off to him for his patience and determination, it certainly paid off!

When is the best time to photograph Scotland’s night sky?

“It really depends on what you want to photograph. Generally speaking you should try to go out during a ‘new moon’ as there is no light reflected from the moon to contend with, so this is when the most stars are visible. Winter nights are also obviously easier due to the extra darkness. My personal favourite is to photograph the Milky Way, which is more vibrant in the summer months. The lighter nights make it very difficult to observe, but this only makes it more rewarding once I am able to find the right conditions to view it, and even more so to capture it. The spectacular Northern Lights are very popular, and these tend to be more active during the winter months.” 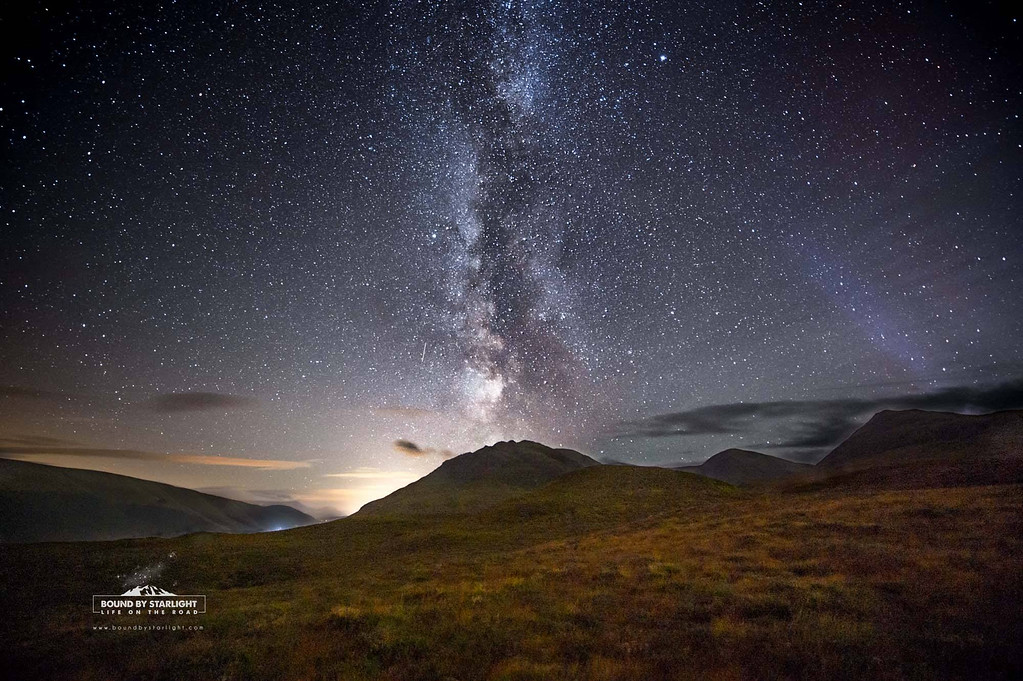 It was during a night of the strongest Northern Light activity Stuart has ever witnessed (and he has spent many a night chasing the Northern Lights!) that he stopped to capture this incredible shot of the Milky Way over the hills of Glengarry in the Scottish Highlands. As explained by Stuart himself, one of the joys of exploring the night sky is that the longer you stop to look, the more that is revealed to you. This is a perfect example.

What are your top tips for aspiring night photographers?

“Find darkness…manmade light pollution is a massive problem and makes viewing the stars incredibly difficult. The darker the location, the more rewarding the photographs will be. Also watch out not to use too slow shutter speeds or you will start to see star trailing rather than improved image quality.”

4 – The Glenfinnan Viaduct Under The Stars 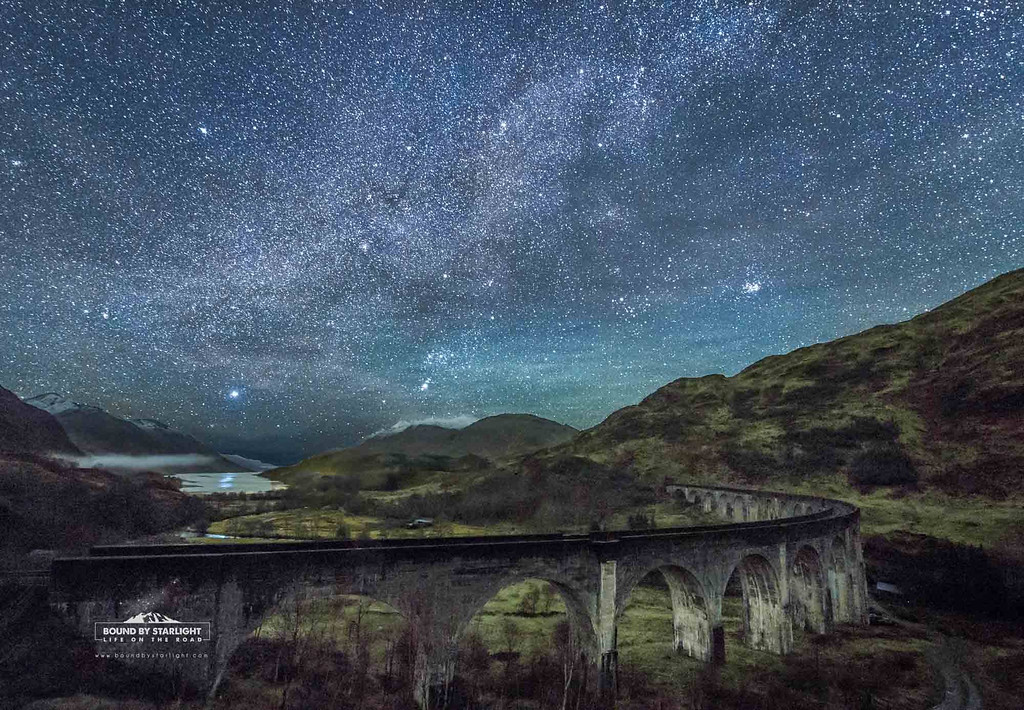 It was during a night of uncertain weather that Stuart’s patience once again paid off for this spectacular shot. It wasn’t until 2.30am that a window of clear sky opened up allowing him to capture the amazing railway viaduct facing south west. What makes this image even more interesting is what happened afterwards however. It was after around 2 hours of patient photography that Stuart finally returned to the warmth and comfort of his car around 4.30am to cook up an early breakfast, only to find his car being approached a few moments later by a beautiful young stag, presumably lured by the smell of his breakfast! Amazing!

Which image was the most difficult to capture and why?

“Oh that is a difficult question, I suppose it’s cheating to say the image I have not captured yet? At the moment I am climbing hills at night with the hope of having the stars above me but the clouds beneath me. I haven’t been too successful so far, instead mostly emerging in the middle of ‘cloud sandwiches’.  Also I find that clouds move like waves, engulfing me in fog that sometimes never lifts. Leaving me in the cold, surrounded by darkness and getting wet. I only have the stamina to stay on the peak for a couple of hours before I need to think of my safety and return. Other than that, I am trying to create as accurate as possible 360-degree interactive image spheres. I hope that by March I am able to consistently produce spheres that are completely accurate, but it is the most complex and frustrating project I have undertaken so far. However I believe the results will be worth it as I think these spheres will give people a more immersive and encompassing feeling of what the night sky is like. Some of the traditional images can cram vast amounts of sky into a small photo, making it hard to identify the stars or appreciate the shear scale of what is out there.”

5 – The Milky Way Over The Argyll Peninsula 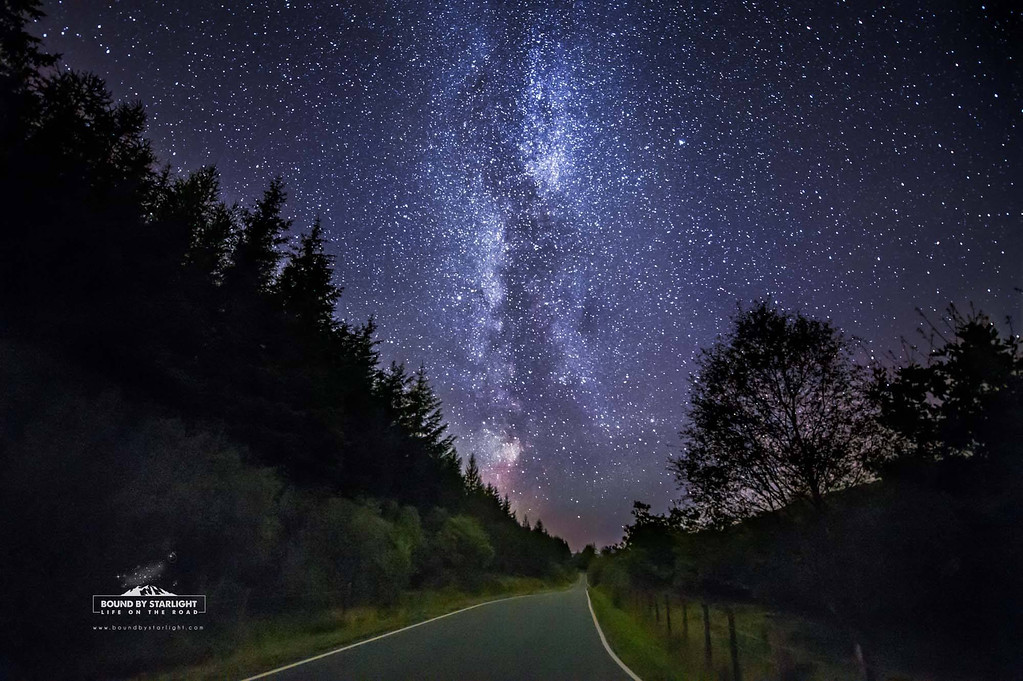 The Milky Way Over the Argyll Peninsula

Last but not least is this beautiful shot of the Milky Way over the stunning Argyll Peninsula near Scotland’s dramatic west coast. Taken late in the evening without much traffic around, Stuart was able to capture a strong contrast between the bright and vibrant night sky, and the dark and peaceful earth below.

What camera equipment to use?

“Currently I am using two Nikon D4S cameras and either a 14-24mm f/2.8 or 24mm f/1.4 depending on what I want to achieve.  I use a Gigapan panoramic tripod head and some really cheap tripod legs that weigh a ton and I want to replace! I don’t think this is the kit I would recommend to a beginner. You just need a camera where you are happy with the image quality around 4000 ISO a shutter speed that goes up to 30 seconds (the longer the better) and a good quality f2l8 lens.”

So that’s it! Our top 5 favourite images from Stuart’s stunning 2016 collection. If you love them as much as we do, then hop on over to Stuart’s page here to place your 2017 calendar order! Or if you want to see some of our wedding video Scotland films then head over to our page!