Is The Inca Trail Too Popular Now?

The Inca Trail seems to split travellers straight down the middle. For some, it is a chance to walk in the footsteps of the Incan Empire, to a forgotten city shrouded in mystery. For others, it is a well worn, tourist path, too cliched for many hardened nomads.

But what is it really like? Is it too busy with lots of people? Is is too easy? Has it simply become too popular? 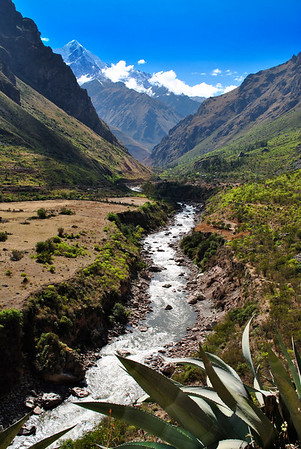 To understand our view, a little background on us: we’ve completed some epic hikes, from our Rinjani trekking adventure in Indonesia, to our Sapa trekking experience in Vietnam, we’ve done our fair share of hikes. We enjoy backpacking but we also like the finer things in life.

The Landscapes of the Inca Trail

Surrounded by deep valleys and incredible vistas, the Inca Trail offers some incredible sights, one of the major reasons for its popularity. We completed it in the month of July, and we had perfect weather the whole time. No rain, no clouds, just blue skies and sunshine. We were given countless opportunities to take photos, sometimes stopping every 10 minutes to admire another incredible view. The best opportunities for photos were on the first and second days of the trek, so make sure you take lots at the beginning.

Day one finds you walking alongside the Vilcanota River, providing you with opportunities to take great mountain range photos and landscapes. Day two, at the summit of Dead Womans Pass, is another great opportunity to get some photos with the mountains in the background, but make sure to take photos of the other side of Dead Womans Pass too. We thought the alternative view was much better. 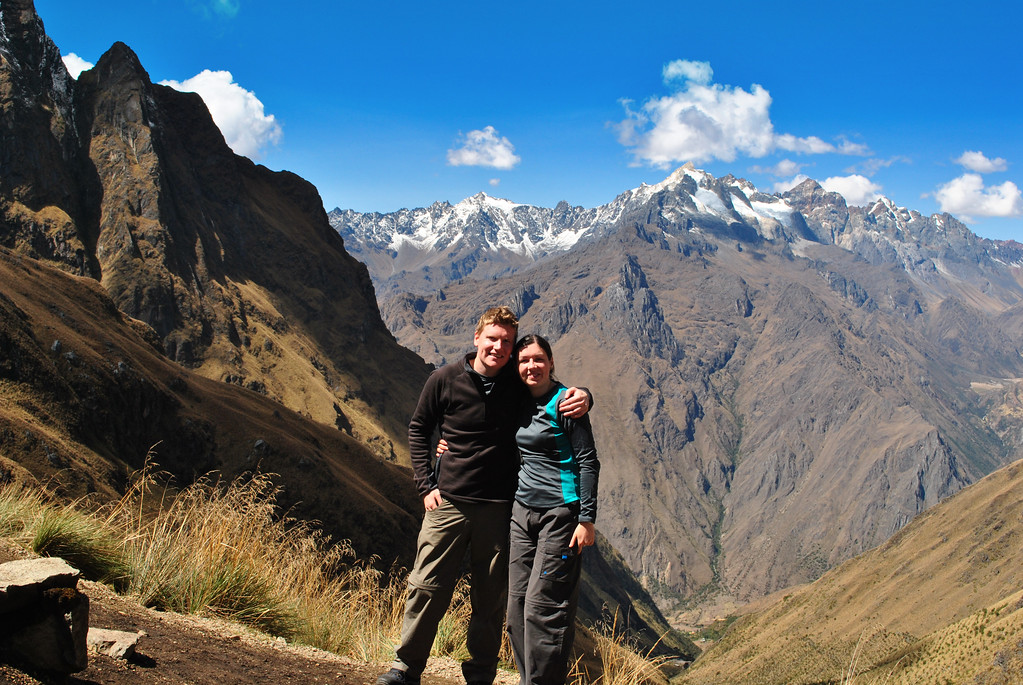 Rush hour on the Inca Trail?

The chief concern amongst many people is the fear that the trail is crowded. This I think depends on what you are used to and what you expect. We didn’t mind the fact that there were other people walking the same route as us, and for the majority of the trek we were completely alone (as a couple) or part of our group of 10 people walking it together. This suited us fine, we weren’t looking for complete isolation and silence on the trek.

Having said that, there were parts of the trek when we were with a number of other people and groups, it just depends what stage of the trek you are on. Day one we found ourselves pretty much alone for the whole day, occasionally bumping into a llama or group of locals which was fantastic. I don’t remember seeing another group on the entire first day, until we reached camp where there were a few other groups camping in areas near to us.

The second day we climbed ‘Dead Woman’s Pass’, and this was the ‘traffic’ day. We saw most of the other groups at this point. This part of the trek certainly became a bit of a bottleneck of people, but the fact that day two is the hardest day inevitably meant the different tour groups would bunch up. Having said that, day two isn’t easy as you have to walk up a path of steps for a number of hours, by the end you’re only looking a couple of feet in front of you towards your next step! The top of Dead Woman’s Pass saw a number of groups congregate there, but again it wasn’t so busy that you couldn’t find your own spot to recover in silence.

On Day 3, and our descent to the final camp before Machu Picchu we barely saw anyone else and we felt like we had the trail to ourselves.

If your guide was like ours, whether you are in a large or small group, if you want to walk alone (or with your partner) they respect this and allow you the time and space you want to enjoy the trail your way.  We were lucky as we had a great group of people of mixed ages, and abilities, and we had a fantastic guide who didn’t insist we all stick together.  He simply went up front and walked with whoever was fastest, and waited at the next stop point.  At the same time our second guide walked with the slowest.  In reality it meant we waited for an hour or so at each point as the slowest caught up, but as days 1 and 3 were pretty easy it meant we weren’t pushed for time. 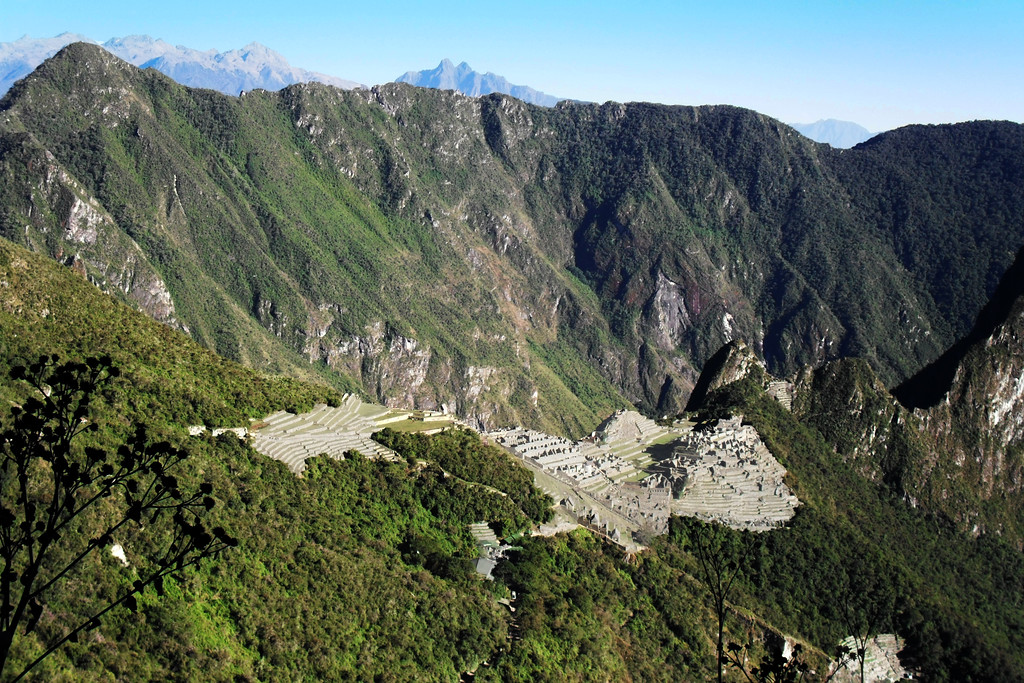 Working up a sweat

As we said earlier, we’re two young and relatively fit people who don’t go hiking or hill walking when in the UK. We found the trail to be a comfortable trek, with the notable exception of a few hours on day two climbing Dead Womans Pass really testing us. In our group, we were the youngest, with the oldest being Don (a 72 year old grandfather) and he made it round the trail as well without any complaints (he just took a bit longer but fair enough!).

The most ridiculous thing about the Inca Trail is watching as your 50/60 year old porters run past you with your tent and cooking equipment on their backs to set up in advance of you arriving. All while you carry your small bottle of water and camera on your back. 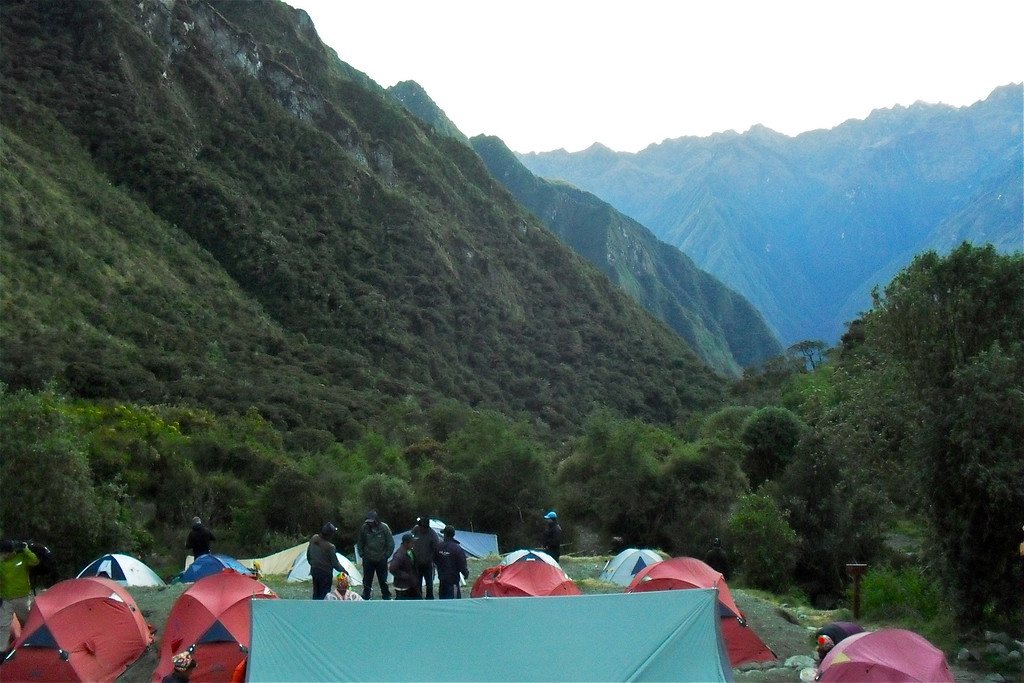 The camps were great, the tents pitched for when you arrived, and the food they cooked was incredible. Soup, potato cakes, rice, lentils – arguably one of the most impressive elements of the trek was the food! And that is saying something considering how much we love the food of Peru! The toilets were pretty awful as you may imagine so be prepared.

We absolutely loved our time on the Inca Trail. At times we were completely alone in the silence, and at other times we had company from our group. Either way we always felt like we had a choice of what experience we wanted to have. The scenery was incredible, and is on a par with our experience of trekking the Tongariro crossing in New Zealand. The difficulty was also pitched just right for us. We would highly recommend it, and remember, you’re walking along the Inca Trail to reach Machu Picchu!