Camel Trekking Under The Stars, India

There are many romanticisms when it comes to travel. The thrill of arriving in a strange new land, the exotic fruits, or the intriguing new cultures and customs.

There are also times when you wonder what you might be letting yourself in for, whether it be the time we went snorkelling in the Galapagos, bracing for a polar plunge in Antarctica, going on an epic volcanic Rinjani trekking adventure in Indonesia, or a Sapa trekking experience in Vietnam, you never quite know whether the experience you’re about to have fits with the vision you have for it.

As we were about to clamber onto our camels in the dusty, hot desert of Northern India, it was becoming clear our expectations might not fit with the reality that lay ahead that day and night.

We’d arrived in Jaisalmer, and settled into our small Haveli, where we could watch the comings and goings of a real life fort. But we’d really come to Jaisalmer to do one thing, take on one of the oldest romantic notions of a camel trek through the desert. Any romantic vision we had for the trek quickly disappeared as the harsh reality of life in the desert became very real.

I suppose, with all stories, the warning signs were there from the beginning. 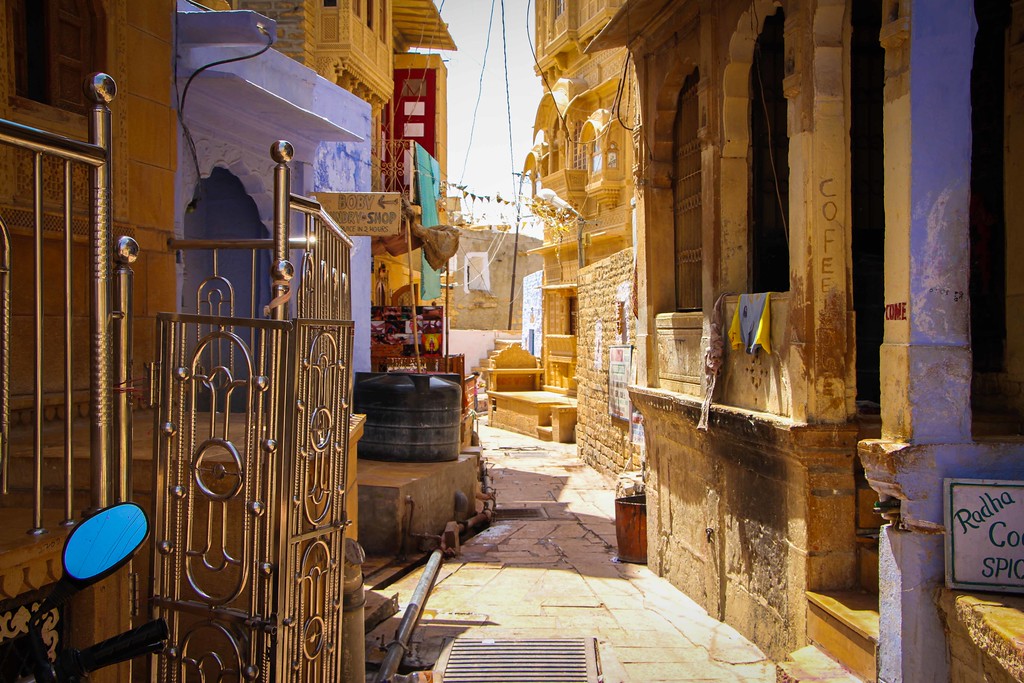 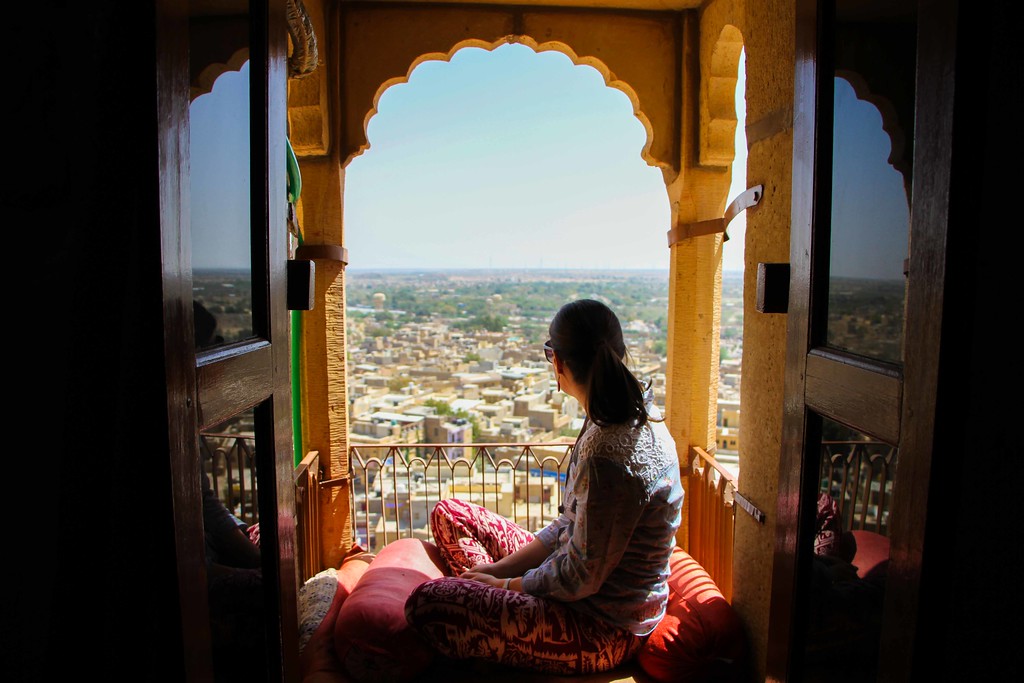 Packing a small backpack for our overnight trek, we made our way out of our haveli and into the blistering afternoon sun beating down on Jaisalmer. When it was time to leave, we walked down the winding red hot cobblestone streets of the fort to find our ride into the desert. Sitting in the afternoon sun, our battered and tired looking jeep sat proudly on the street, its dust covered frame spluttering as it waited for us, our driver obviously keen to get going.

We jumped in the back, grabbed onto whatever we could hold onto, and we were off, hurtling along the dusty and sandy roads outside Jaisalmer and into the desert. Destination unknown. 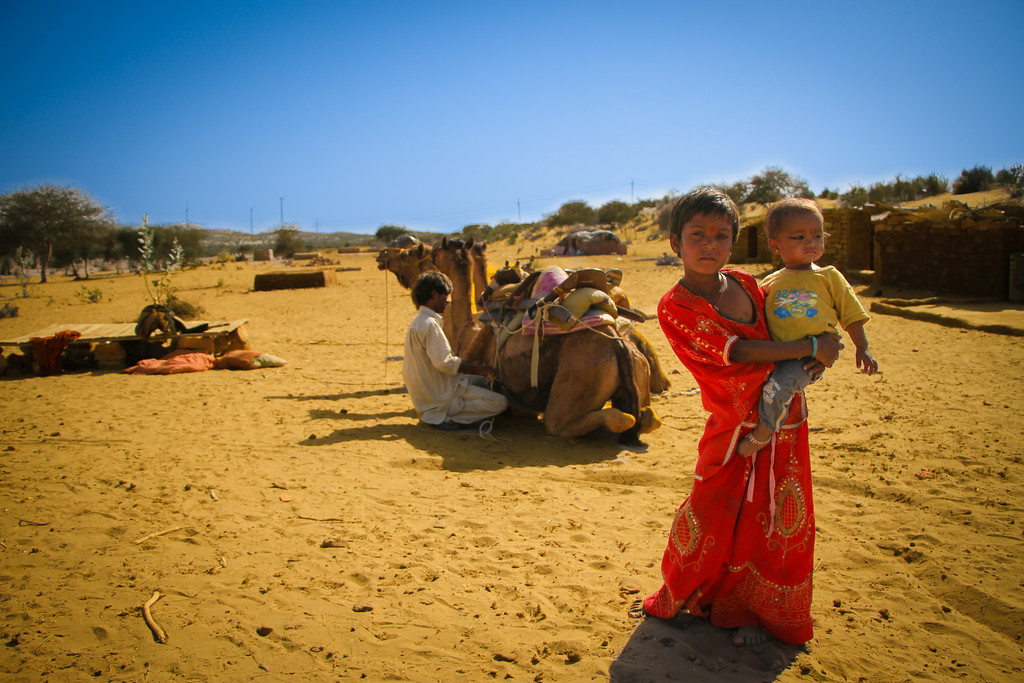 After an hour or so of hanging on for dear life, we arrived at a small brick/mud dwelling in the middle of absolutely nowhere. A young girl carrying her younger sister greeted us, her skin dark and cracked from the searing and unrelenting heat of the desert. Here we sat, and we waited.

After a while, in the distance we could make out the faint silhouette of two camels, our view obscured by the heat haze rising from the desert floor. As they approached, we noticed two men walking alongside our camels, evidently our guides for the day and night. 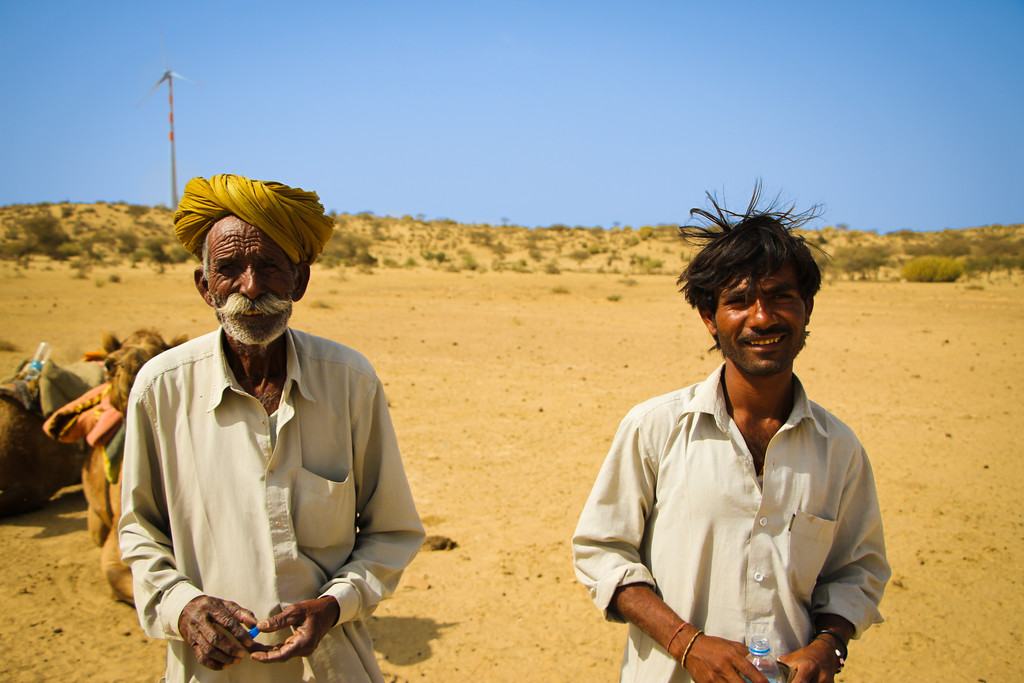 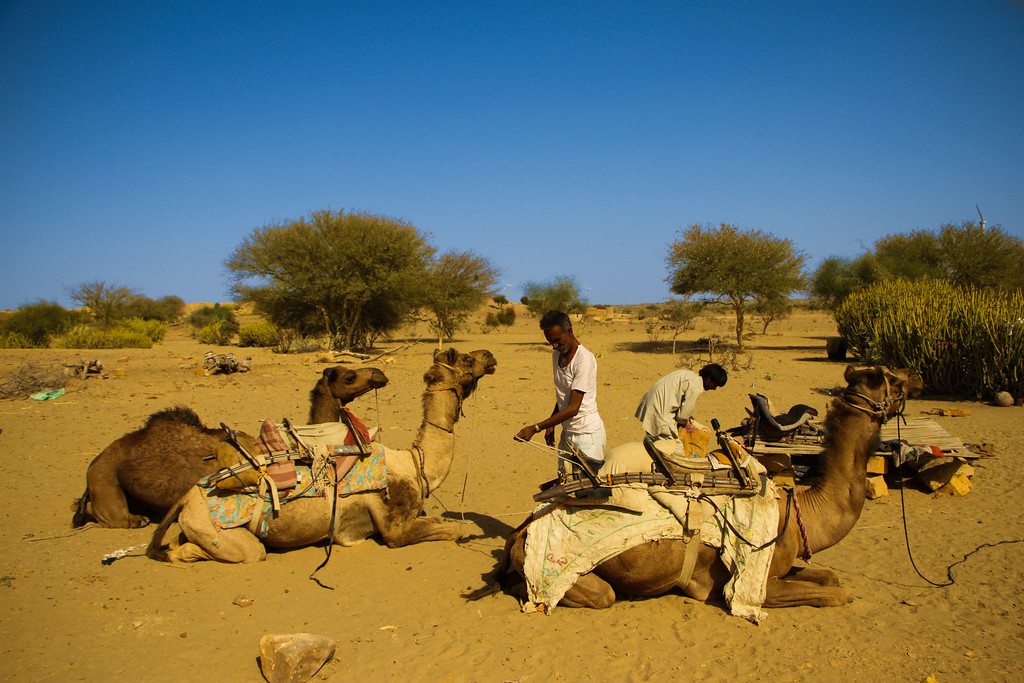 To see camels up close is still an exciting experience for us, their size overwhelming as we are reminded of the shear scale of these resilient animals. Arriving, they slumped themselves down in front of us, and waited as the saddles were padded out with various rugs, sheets and cooking utensils. After another while, it was time to get going.

Anyone who has taken a camel anywhere will know the absolute terror and fear of the camel standing up and sitting down. Laura was to go first, struggling to get into the saddle which was almost as high as her even when the camel was sitting down. As soon as she was on, the camel decided it was time to stand up, jerking forwards and then backwards like a real life, desert buckaroo. She was up, and she was still on the camel. So far so good.

Now it was my turn, I clambered on, grabbed hold of whatever I could, and braced for the launch. A jolt forwards, a bigger jolt backwards, and I was up and still in one piece. It was time to get on our way. 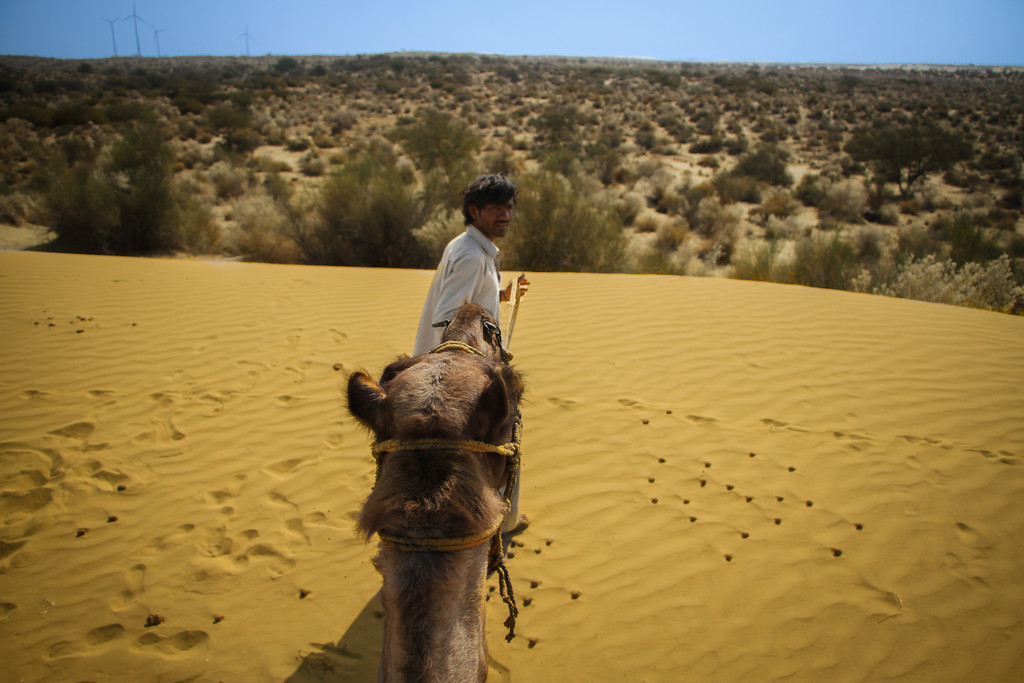 The ride was uncomfortable to say the least, constantly shifting in the saddle to allow the blood to return back to our feet as the sun beat down and the sand whipped up around us. After a couple of hours of slow progress, we began climbing sand dunes, hanging on again as the camels ascended. And then we stopped.

We’d arrived at Casa Sand Dune for the evening.

As the camels were liberated of their cargo, we had a chance to really admire them. Camels are some of the most incredible beasts we have had the privilege of getting up close and personal with. For us, it is simply their size that is so intriguing. Their mouths and heads are gigantic, with thick, wiry whiskers and hairs protruding from all areas. The way they sit is fascinating to look at, their legs seemingly contorting and bending in places where we assumed there were no joints. 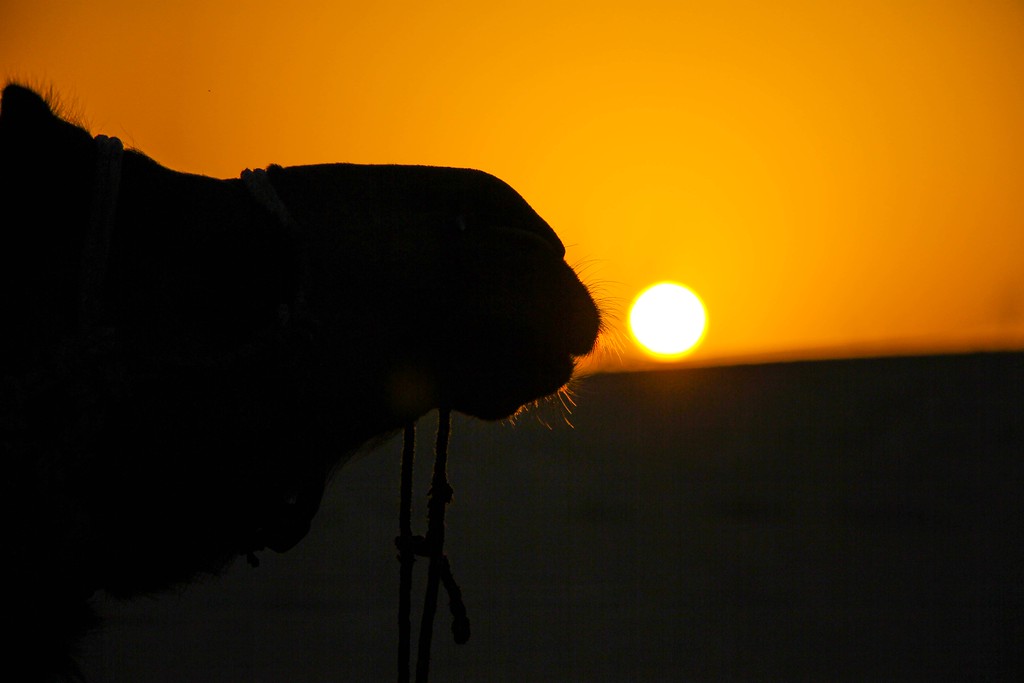 It was at this point that my camel (Papaya) decided to relieve himself, a torrent released from his bladder into the sand dune we were to call home for an evening. Now we had a water feature as well, what’s not to like?

It was at this point that we got a better idea of our sleeping arrangements for the evening, and it was to be even more basic than the time we camped on Antarctica.

Close your eyes for a moment and picture what you imagine a desert accommodation would look like. Perhaps your picturing crisp, square white tents pitched into the sand, a small mattress inside with blankets. Or maybe just a basic tent. No such luck for us.

It became very clear to us very quickly that the dirty blankets that had been used to pad the saddle up were to double as both our mattress and blanket. The same blanket that had spent the last few hours, most probably the last few weeks rubbing up against the camel was now our bed.

What would you do? In the middle of the desert, the sun setting, there was no choice, we were sleeping rough tonight.

As we sat and watched our camel guides prepare dinner, the desert came alive. Alive with one little black bug to begin with, followed quickly by another, and another, until there were hundreds of them scuttling about in the sand dunes. And they were big. Did I mention we were sleeping out in the open?

It was survival time now, and after dinner we settled into our beds. Our strategy was simple, take our jackets, wrap them around our heads, tuck them into our blankets and hope no bugs found their way in. The only orifices available were our eyes, but it was better than nothing.

I’m probably painting a poor picture of our time in the desert, but honesty is the best policy when it comes to these things. This was not a romantic camel trek in the desert, it was an uncomfortable slog into the middle of nowhere with no comforts whatsoever. But this was normal for our guides, whom we assume did this almost every night.

And yet, despite all of this, there is absolutely no way that we can complain. This for us was one night in our entire lives. For the majority of our existence, we will sleep with a roof over our heads, with running water and heat available to us at all times. For those guides whom we met in the desert, and their families, a version of this experience is their life.

This is not to patronise our guides. I did feel for them, but I also had huge respect for them as well. They’ve taken the hand dealt to them and done their best, and I always wonder if I had been born into this life, how would I cope? The simple answer is I would just get on with it, just like they do. Sometimes travel teaches you things, sometimes it gives you an experience you’ll never forget, and sometimes it rises up, punches you in the face, and makes you stop and appreciate all that you have, and all that you will ever have.

And there were rewards from this experience, oh boy were there rewards.

Away from the light pollution of towns and villages, the stars came out in all their glory, puncturing the night sky with millions of tiny dots of light, many white, some blue, some red. Just looking at one point of the night sky for a few seconds would result in hundreds more becoming obvious to us. It was incredible.

Shooting stars dashed across the sky at regular intervals, and the silence was beautiful. It was an incredible thing to witness, and for most of the time we forgot about the bugs and snakes in the sand dunes, and our minds drifted away into the night sky. Lying down and staring at the stars in a place you will never return to is something everyone should experience once in their lifetime. 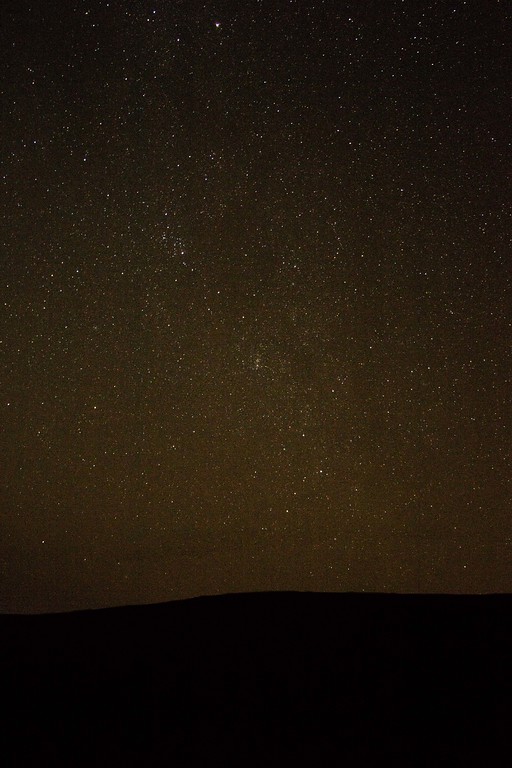 The rest of the evening passed without incident, we slept in fits and starts, and we were happy to get up early to watch the sunrise over the dunes. It was at this point that we glanced down to the sand dunes around us, shocked by what we saw.

Hundreds, if not thousands of tiny trails had been left in the sand around us, the fruits of the many hundreds of beetles that evidently scuttled around, and on us, throughout the evening. As I clambered out from under my blanket, two crawled out from under me, somehow finding their under me without getting crushed in the process. They’re resourceful little things l’ll give them that.

Following sunrise and a basic breakfast of bananas and nuts, it was time to head back to the relative comforts of Jaisalmer. Our guides rounded up the camels, we secured everything back on the saddles, and we made our way back to the mud huts where we’d catch a jeep back into Jaisalmer.

Our trek into the desert had been a short, uncomfortable one, but on arriving back to our Haveli, the experience had certainly given us a jolt to the system. Yes we had been uncomfortable, yes we worried about the snakes and bugs in the desert, yes everything was dirty, but it was only one day and night.

As we sat having dinner as the sun set over Jaisalmer fort, it was another stark reminder to appreciate all that we have, and all that we will ever see in our lives. Sometimes a memory of an experience fades, but we will never forget lying on the desert floor, looking up at the thousands of stars on display. It was a time we were taken away from Jaisalmer, from India, to a place of reflection, a place where we could truly appreciate all that we have.