Cruising The Irrawaddy River From Mandalay To Bagan

“Life is a journey, not a destination.”

Still shrouded in darkness, our old taxi navigated its way through the quiet dusty streets of Mandalay. It was nearing 6am and sunrise was still a couple of hours away. We were a little tired after only landing in Myanmar the previous day, but despite the early start, we were curious and excited for the journey ahead. 9 hours of cruising down the Irrawaddy river from Mandalay to Bagan, Myanmar’s mecca of temples.

Our taxi soon reached the riverside, where despite the early hour, there was a buzz of activity in the shadows of the bare light bulbs. Men loading various baskets and large boxes of produce onto the boat, crew starting up the engine, and lots of fellow travellers eagerly queuing (or perhaps anxiously is a more appropriate word) to carefully walk the rather narrow gangplank to get onboard. As we got closer, I gave Barry a knowing look. The gangplank was only around 20-25 inches wide, it was going to require some very careful balancing with our heavy backpacks! 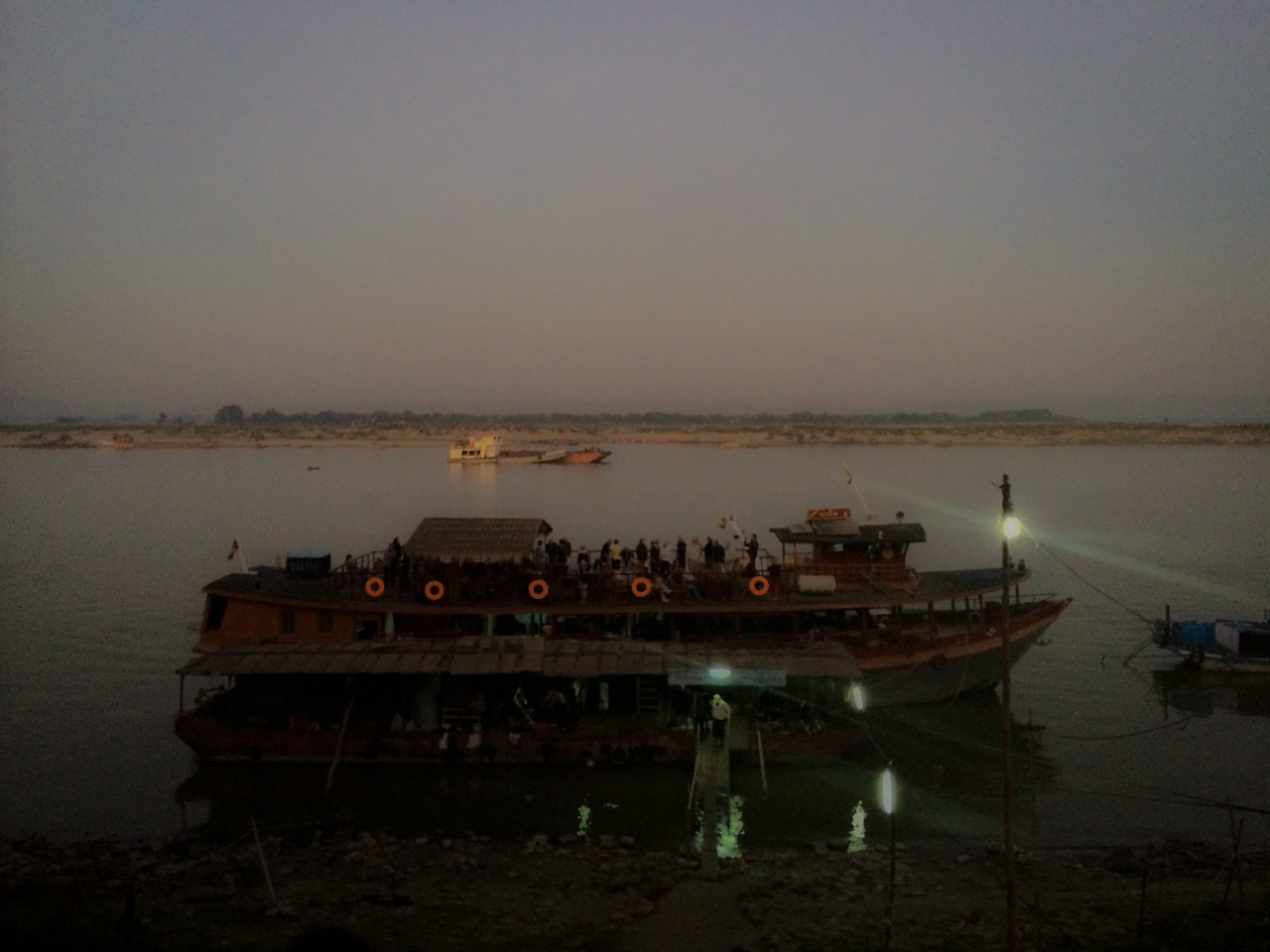 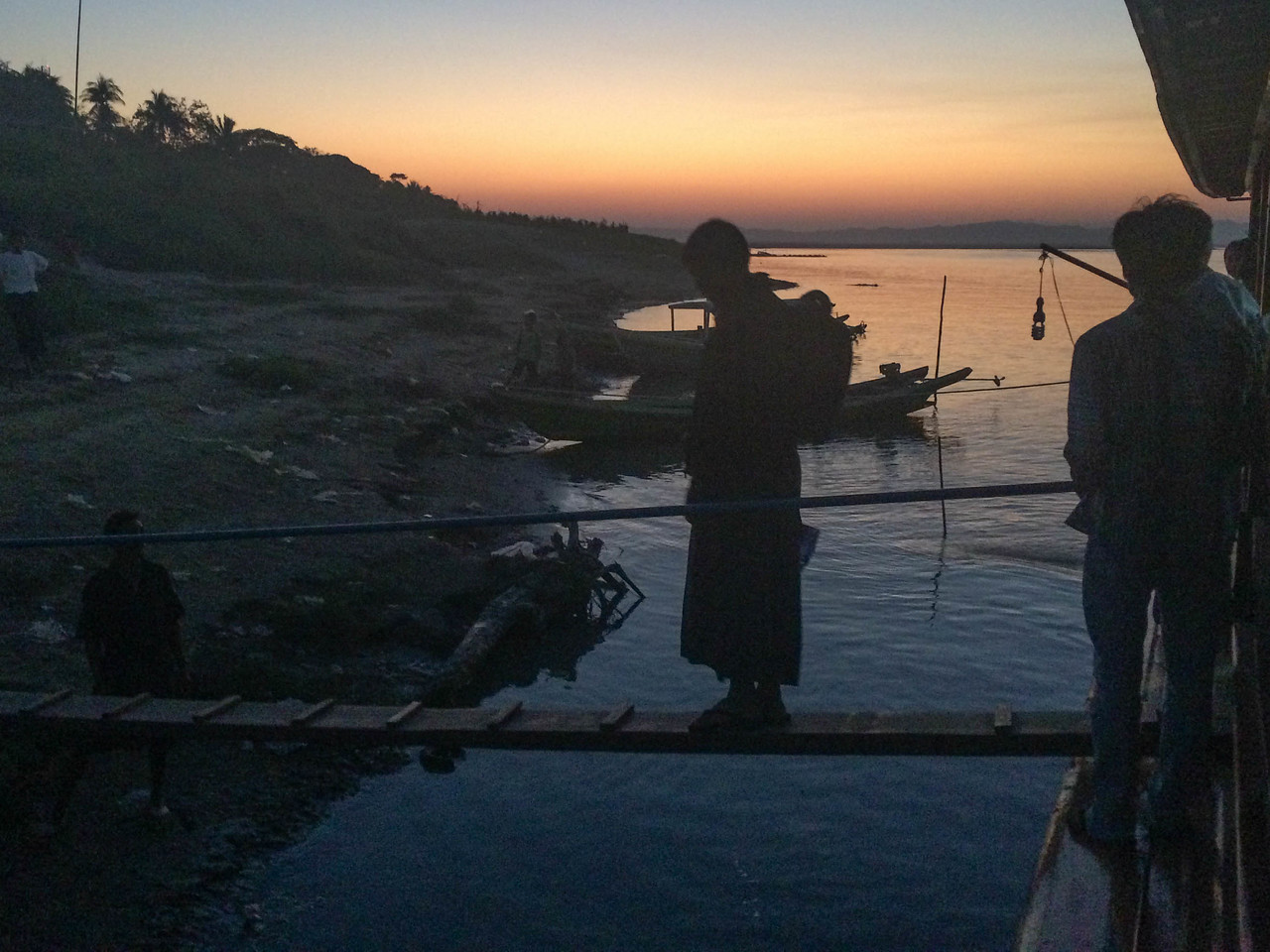 Like everyone else, we made it safely aboard and quickly found ourselves some comfortable seats to settle down for the long journey ahead. We hadn’t been sure of what to expect, but we certainly didn’t expect to have so much space and a whole bench to ourselves! I guess the boat wasn’t at maximum capacity that day. The only thing we weren’t prepared for was how chilly it was that early in the morning. As I looked around at my fellow passengers, a great mix of foreigners, I quickly spotted the locals as they snuggled under their big blankets. I wished I’d brought one too, or at least a fleece, but by now our backpacks were well buried beneath the teak floorboards in the lowest compartment of the boat. Oh well I thought, I knew it wasn’t long until sunrise so we got as comfortable as possible and patiently awaited the sunrise to heat us up.

It was almost 7am by the time we set off and got slowly on our way. I stared out into the darkness and pondered the next 9 hours on my bench. Backache and boredom seemed a strong possibility, despite my usual optimism. 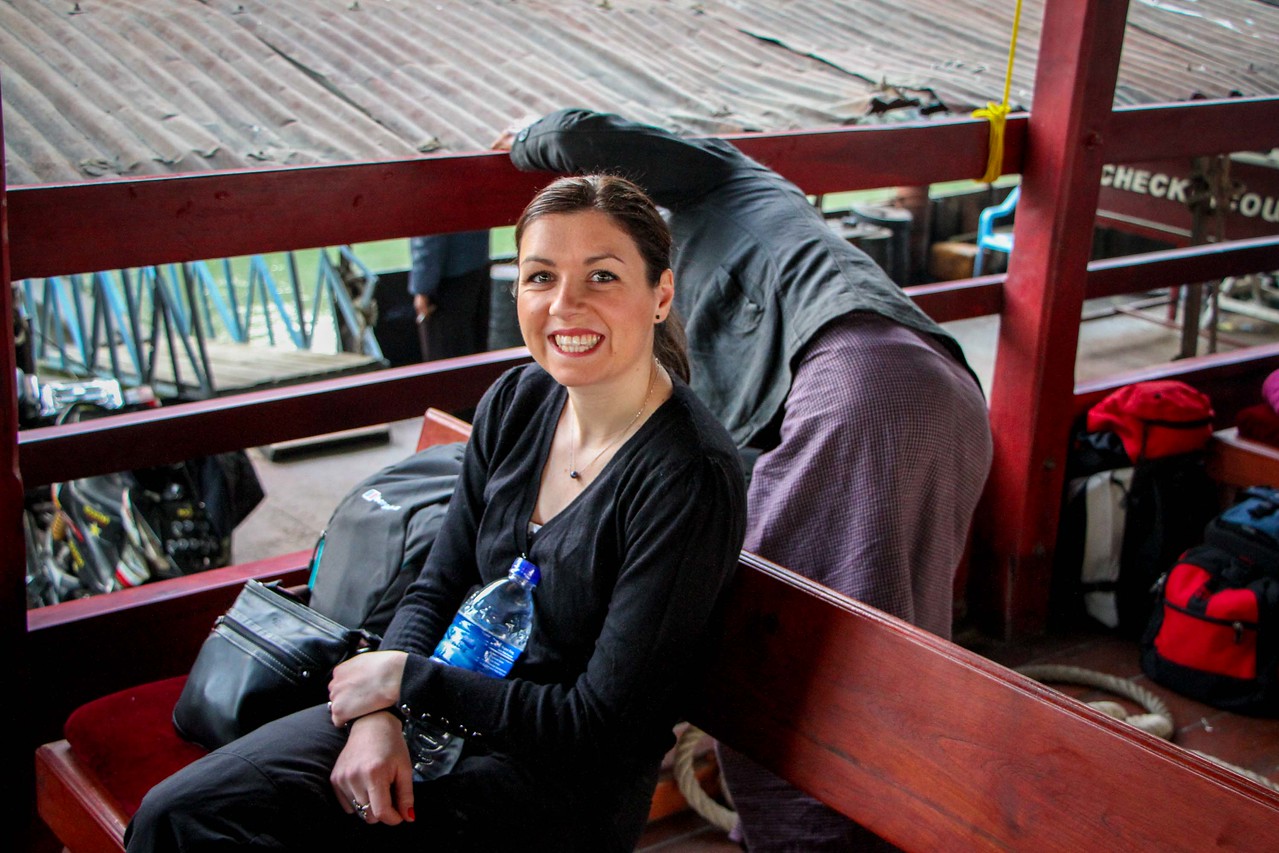 But soon after we waved goodbye to the shores of Mandalay, the sun began to rise and a fresh cup of hot tea and bread with jam was on offer. Amazing! Things were looking up. 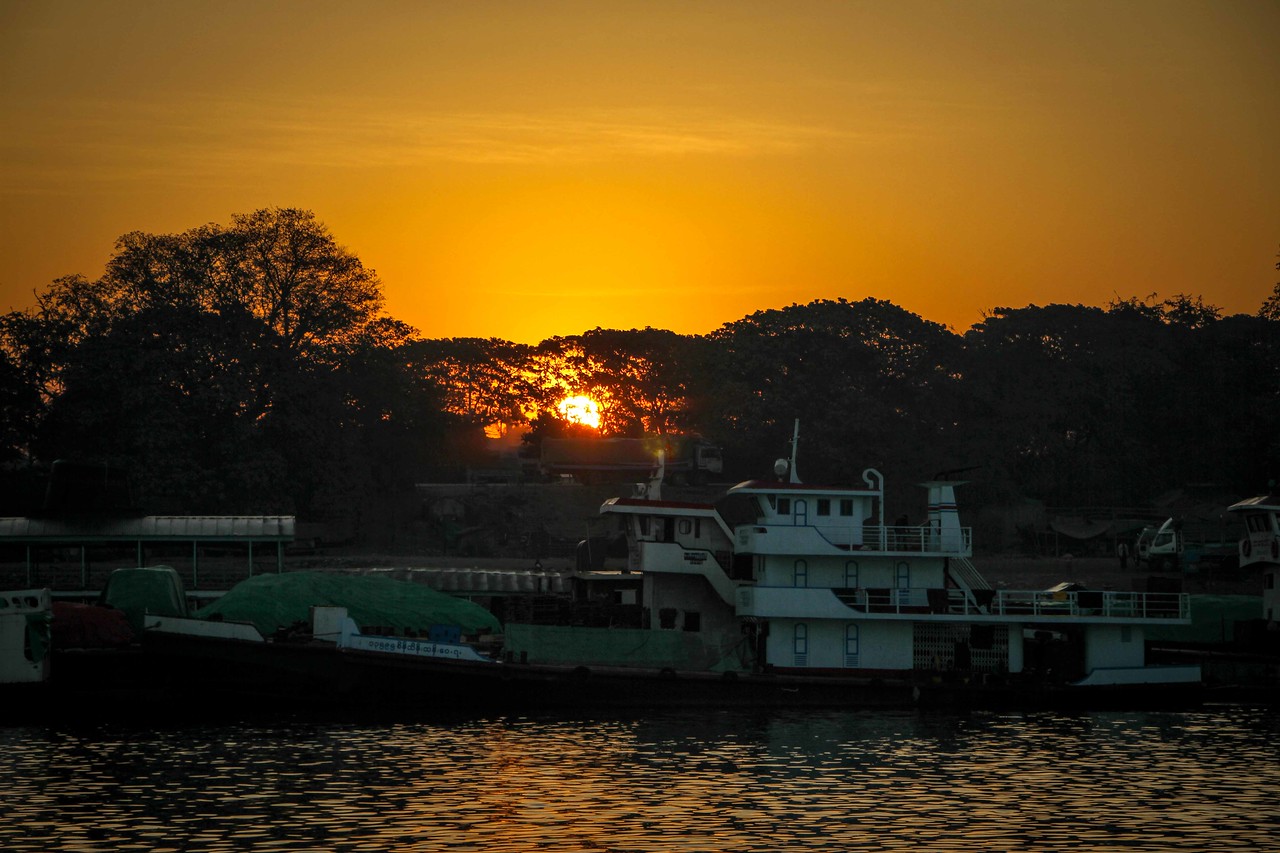 As we held onto our warm cups of tea, sipping them slowly in order to keep as much warm liquid in the cups as possible to heat our cold hands, I gave Barry another knowing glance. There was a lovely air of calm and peace. The boat was so quiet, its engine almost silent, incredible given how old it probably was. Though our very slow pace probably helped. As we gently sailed along, enjoying the changing light, we came across our first passing ‘traffic’ on the Irrawaddy river.

From simple canoes, to little fishing boats and makeshift home rafts, it was fascinating to observe early morning local life on the river. And it wasn’t long before we witnessed our first beautiful Myanmar sunrise. 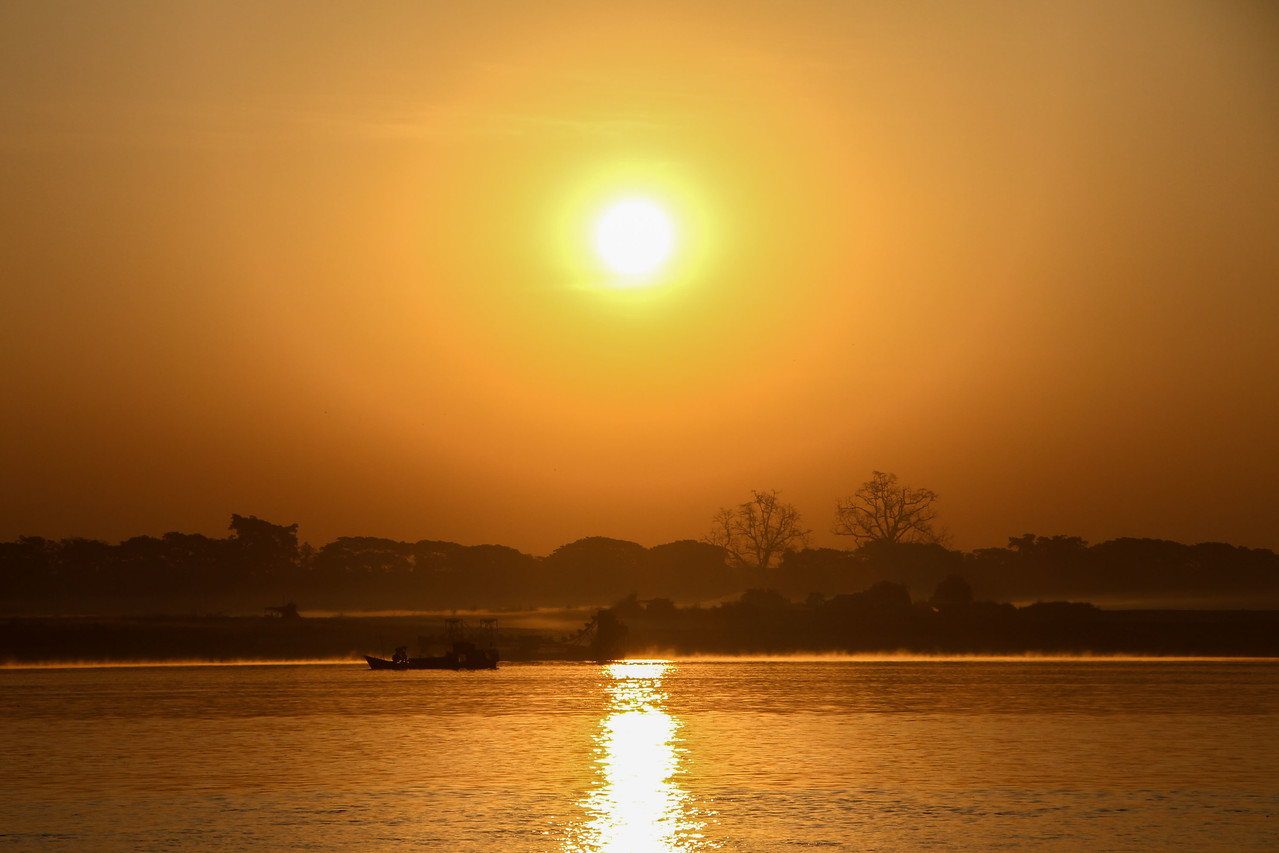 As if it was planned timing (maybe it was!), just as the sun rose, I smiled as we spotted the steeple of a striking gold-leafed pagoda in the distance. 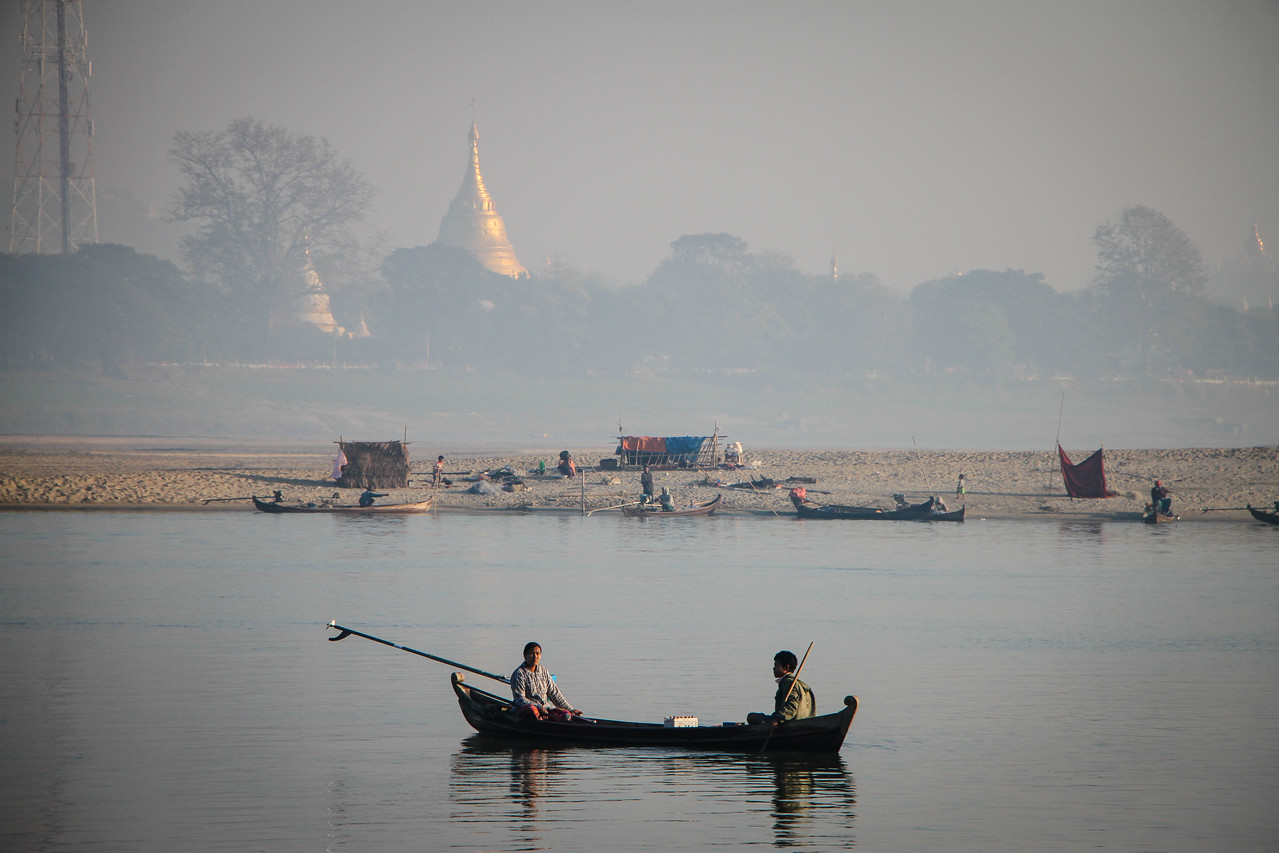 And then there were more. What an incredible sight! We’d reached Sagaing, an important religious centre on the outskirts of Mandalay brimming full of Buddhist monasteries and beautiful pagodas.

In fact the gold steeples just kept coming. And that’s when I lost all sense of time as I sat thinking, is 9 hours going to be enough? I don’t think I ever want to get off this boat. 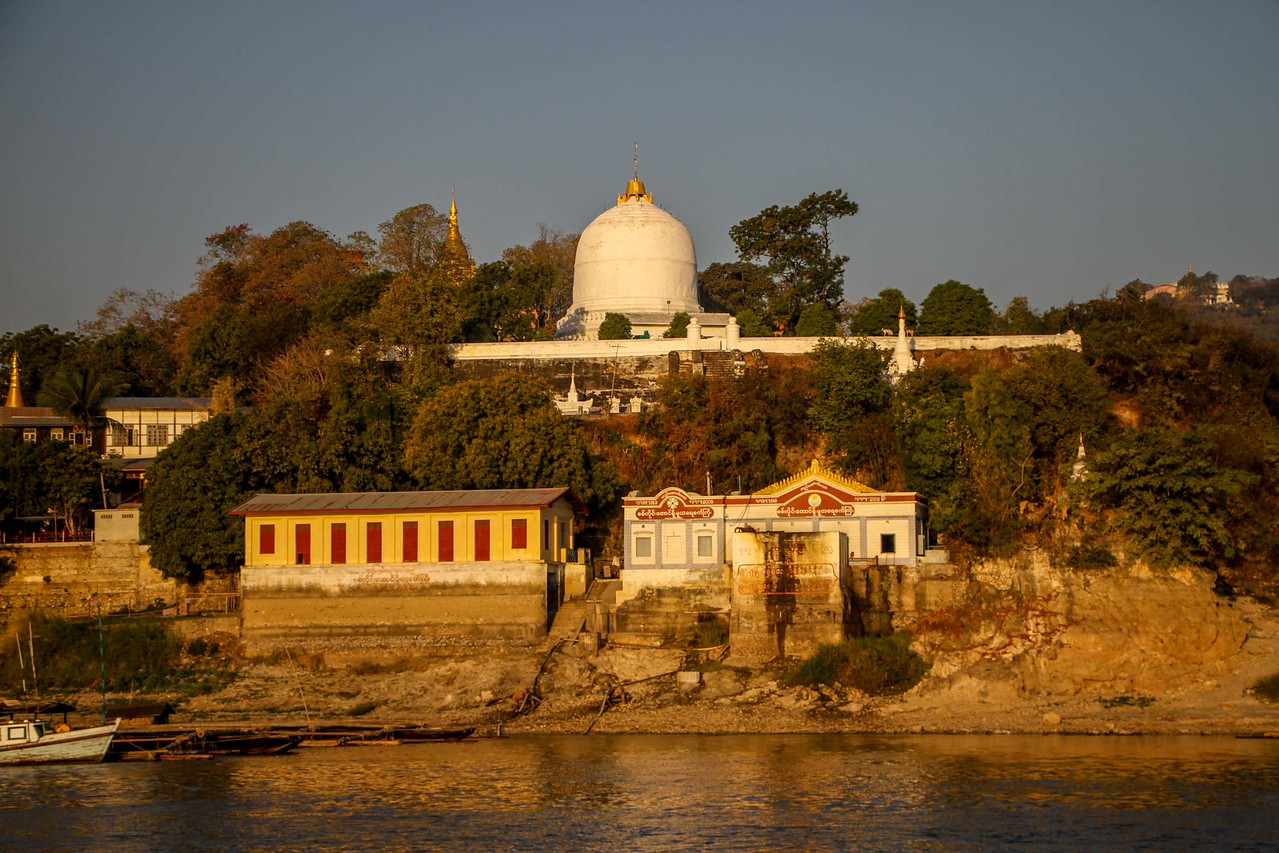 As we passed by the distant temples, old stupas, basic bamboo houses and rustic canoes, it also occurred to me that I’ve never seen anything like this before. Despite lots of travel around other parts of Southeast Asia, this felt different, and almost like we’d been transported back to a completely different era. 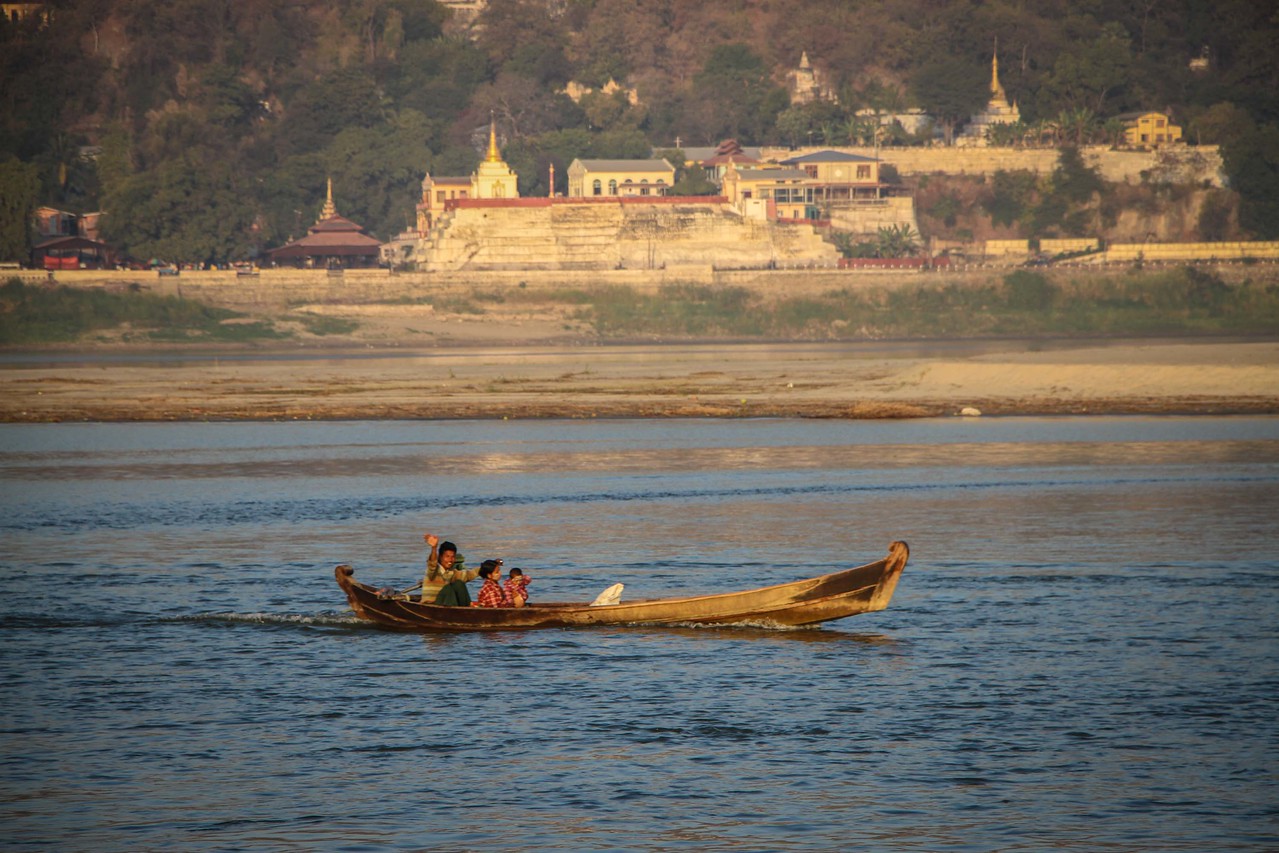 Back on onboard, the temperature had heated up nicely and we’d even looked out the sunscreen in preparation for our jaunt to the top deck. 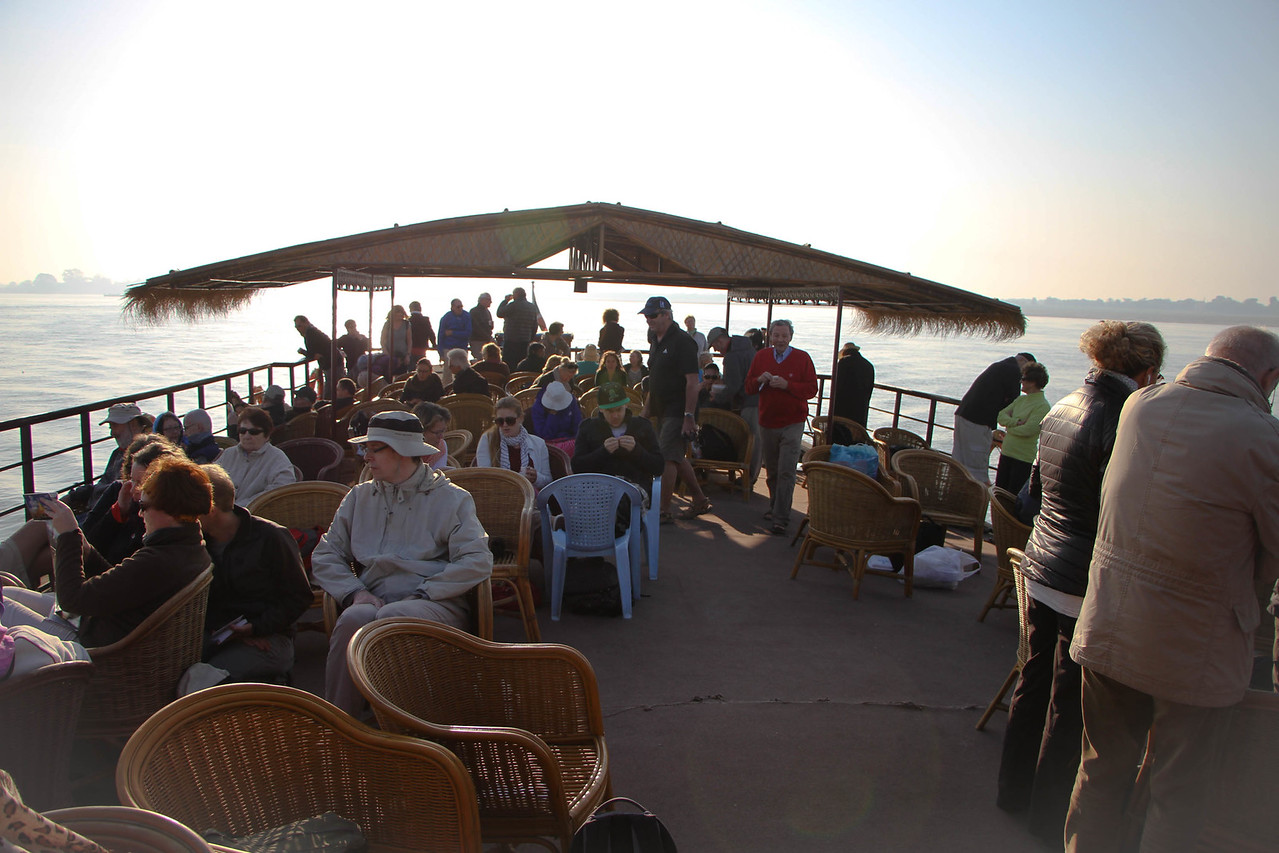 However after enjoying the sunshine for a while, the sun and heat had turned up a level, and with so little shade available, we were relieved to retreat back to our shady bench position downstairs. Especially as there was a waft of lunch being prepared…! 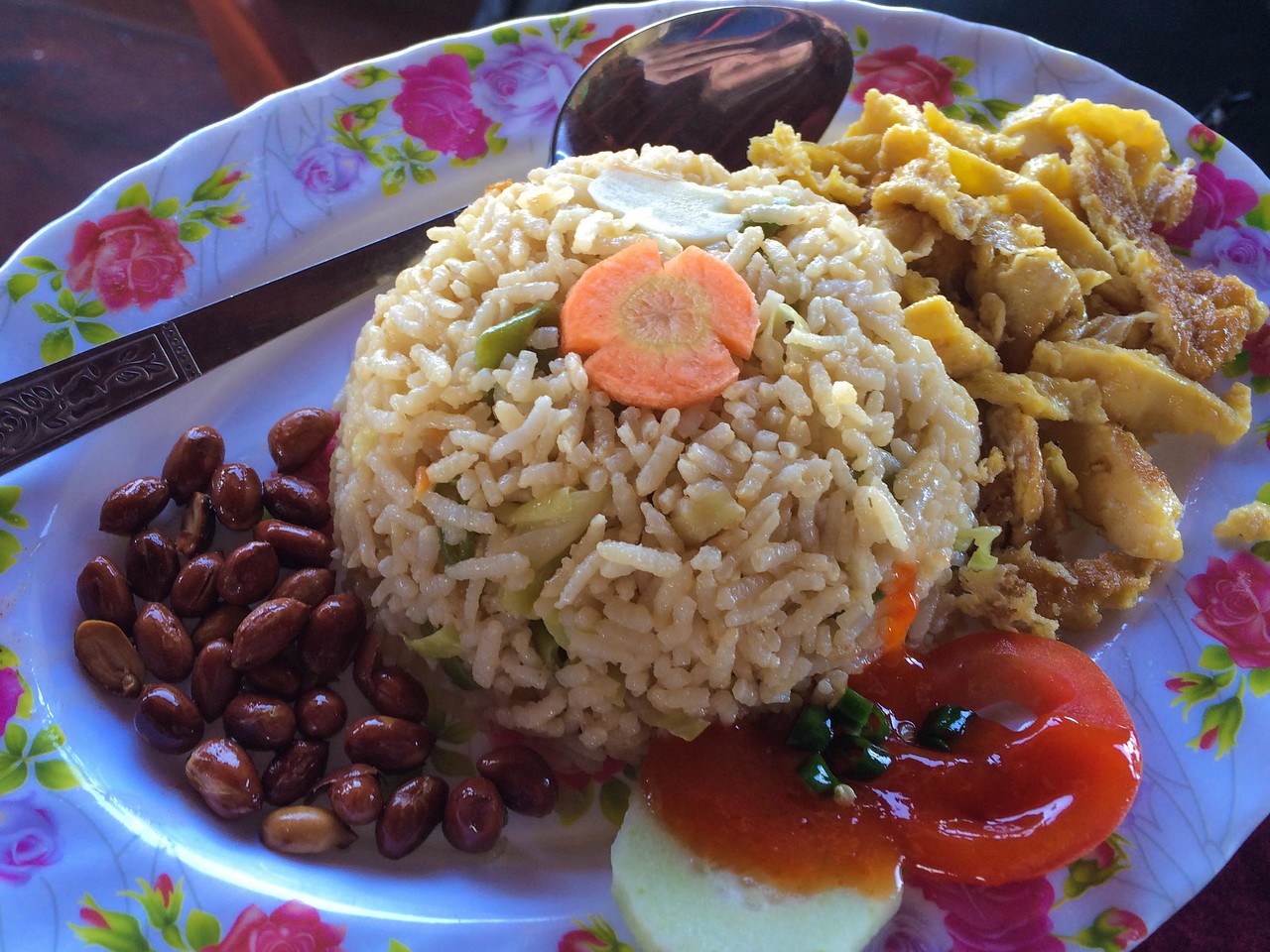 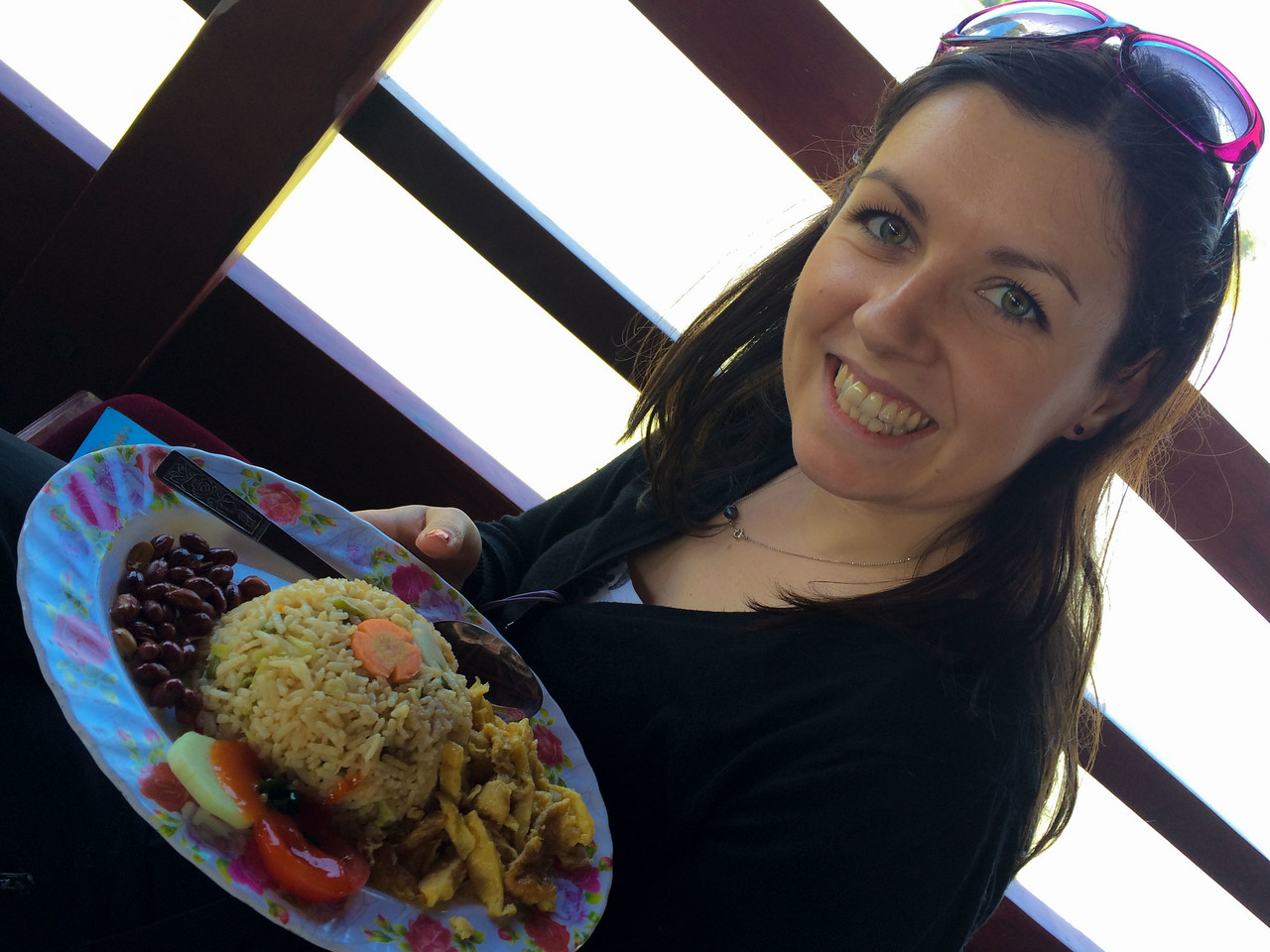 It was a simple choice of fried egg with noodles or rice, and a little veg on the side so we opted for one of each and shared. Both were hot and delicious which was impressive given the basic kitchen facilities!

After lunch, we resumed our people watching, which was just as interesting as the landscape. 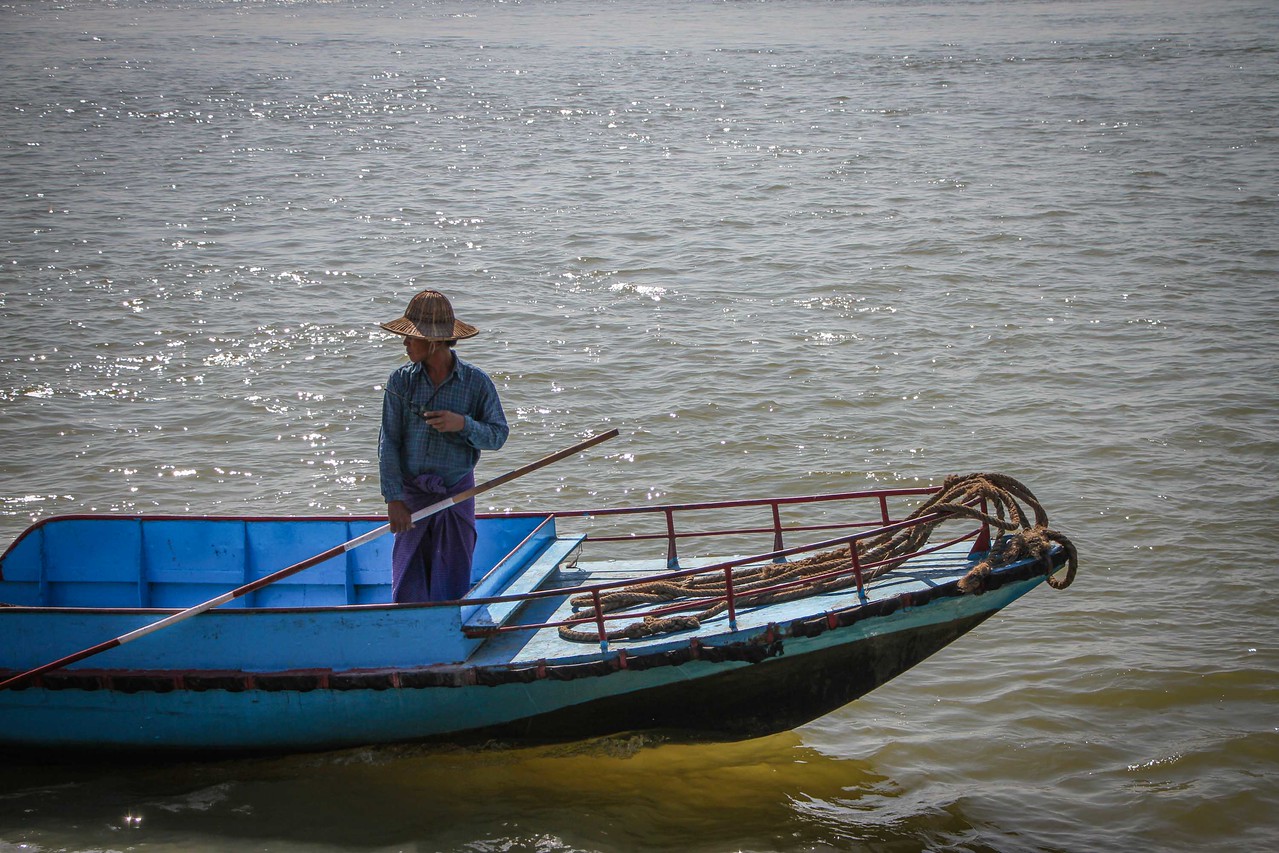 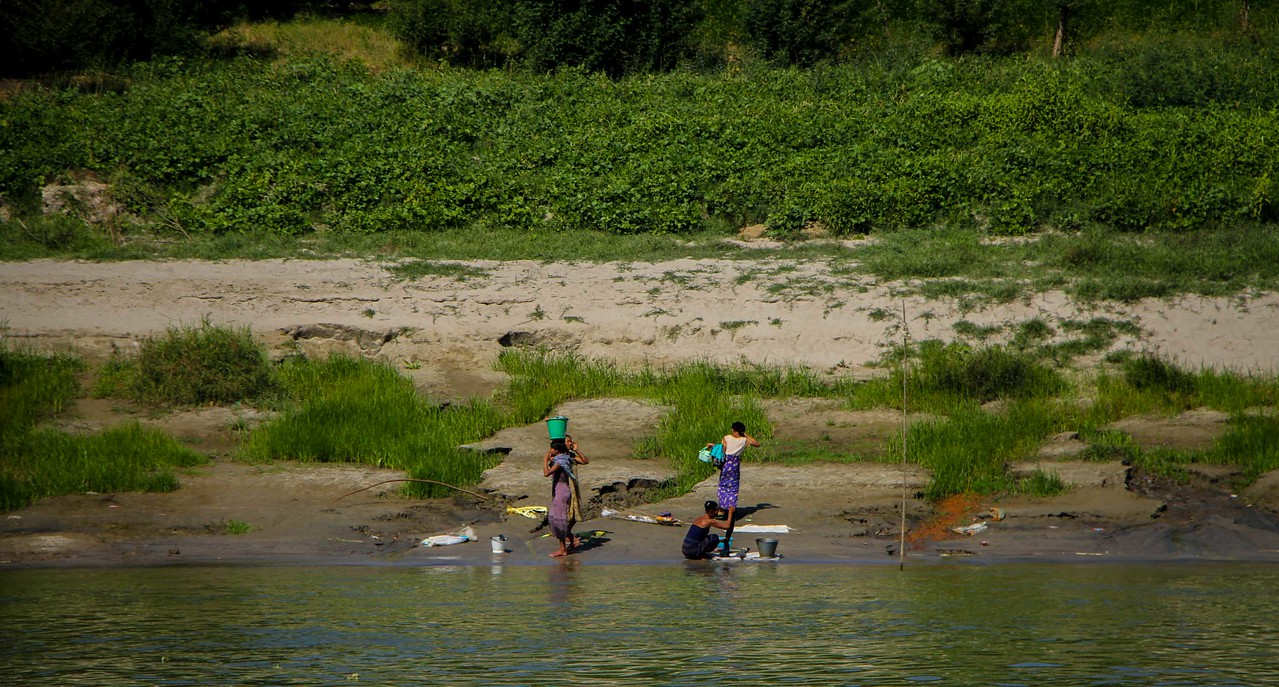 You may notice from these photos that most Burmese men and women wear long wrapped–like skirts knotted in front (known as ‘longyis’), usually accompanied with rubber flip-flops. And for woman, it’s also common to wear wrapped turban-like cloth around their heads. The most distinctive feature of all Burmese fashion however is the common use of ‘thanaka’, a pale yellow paste made from ground tree bark, that is painted on the face. We learned this is partly used for beauty purposes like a make–up and partly used as a sun block, and is applied in a variety of ways but often as square patches or designed like the impression of a leaf on the cheeks with a single dot on the nose. Other times it’s just smeared across the face in a haphazard fashion, but it’s been a strong Burmese feature for the past 2,000 years and is still a unique visual symbol of Myanmar today. 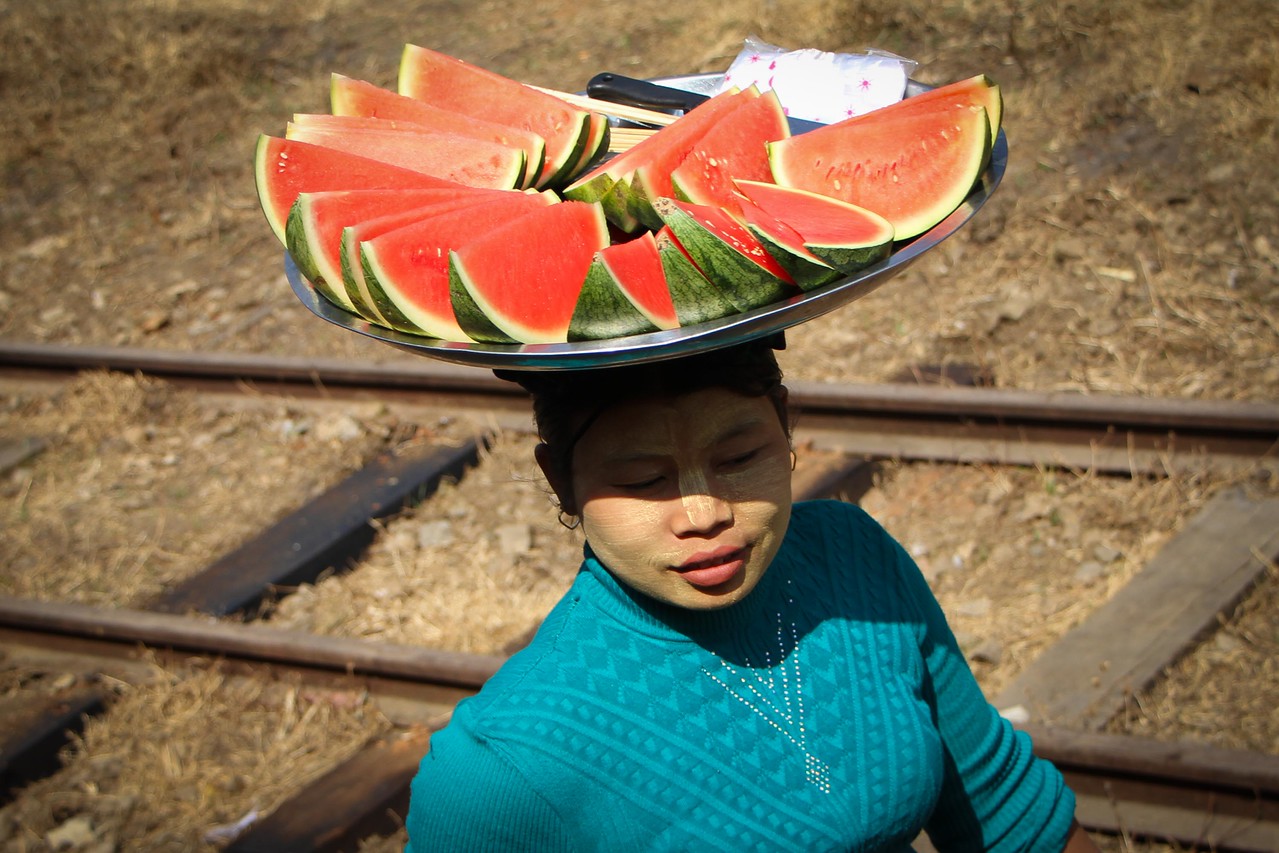 We’ve mentioned it in our other Myanmar articles, the Burmese people are extremely welcoming and friendly, and eager to greet foreigners. We got this feeling immediately after arriving to the country and especially during this boat trip as we sailed onboard with some locals from Mandalay to Bagan. The tourists most definitely outweighed the locals, yet they were happy as always to engage in a friendly “mingalaba” (good day) or more if they were confident in english (which many were).

On route we also passed lots of local trade boats carrying logs or produce, a common sight on the river. 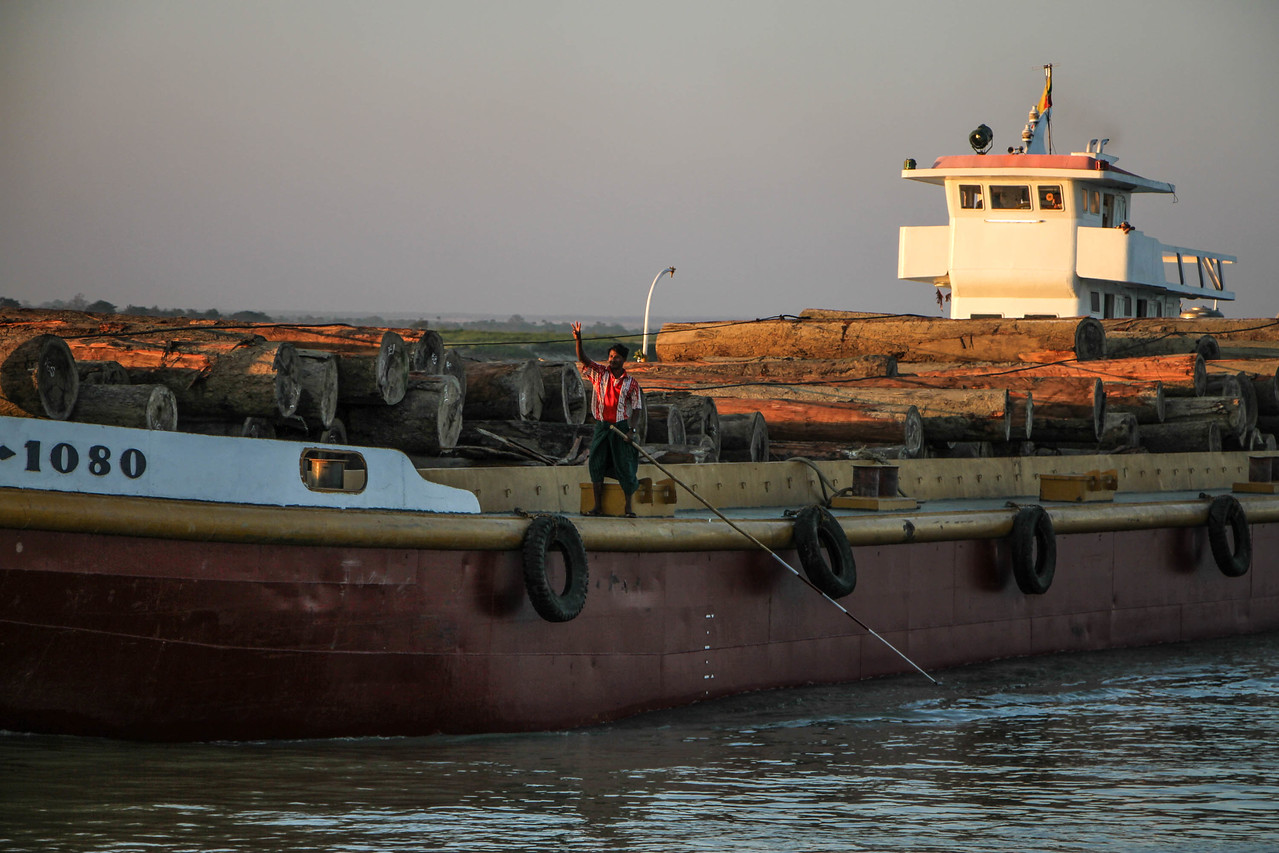 And further down the famous Irrawaddy river, we sailed under the huge arches of the impressive new Sagaing Bridge after waving to some friendly passing by crew! 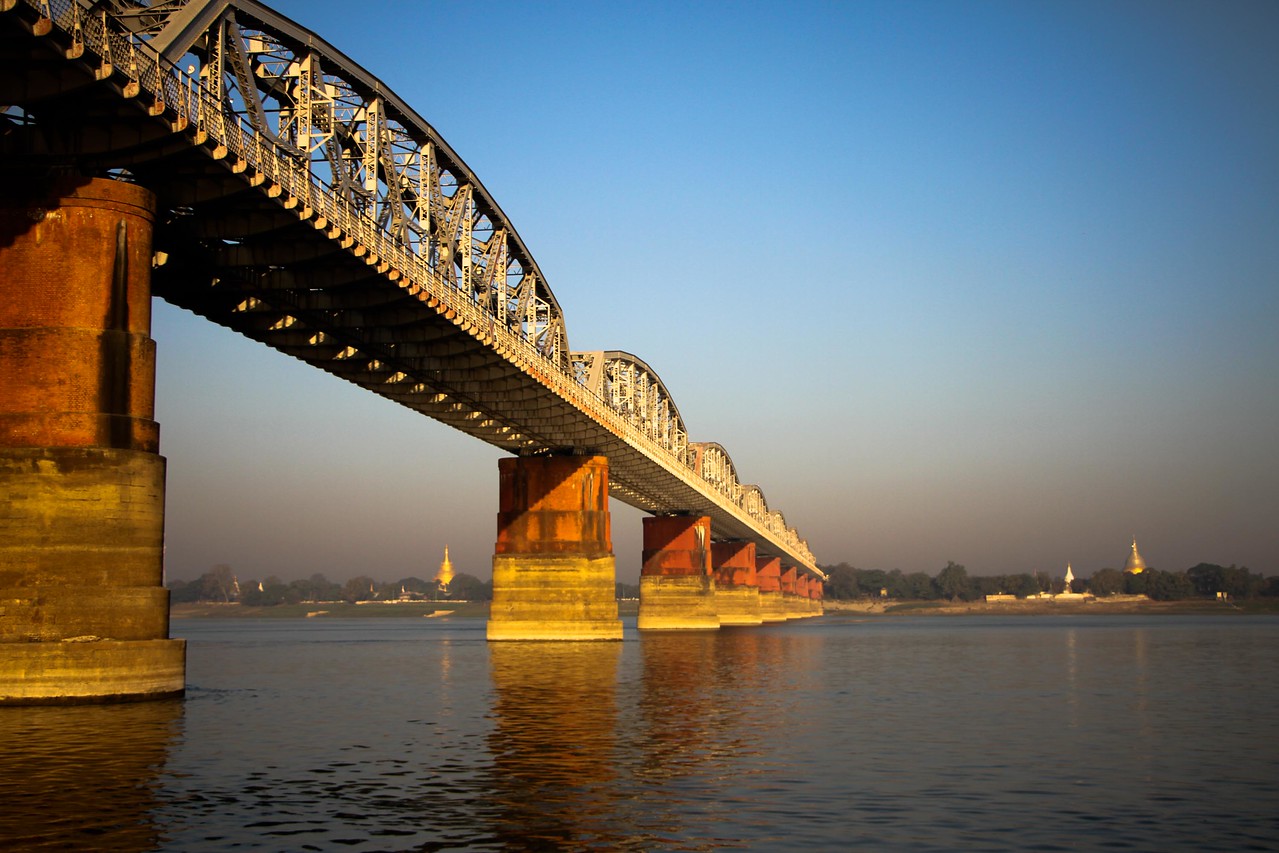 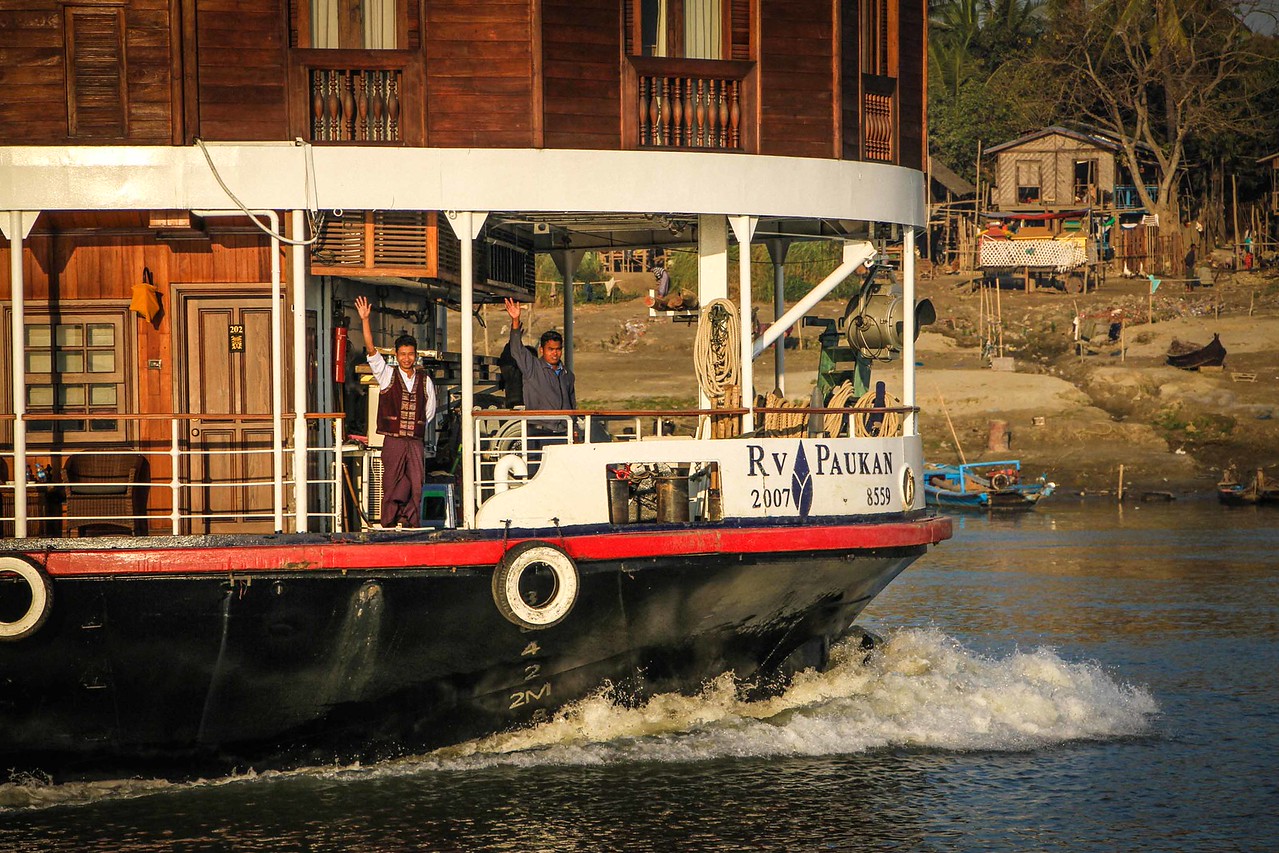 It wasn’t long before the sun began to set on our long slow journey to Bagan, which was when I began to realise we’d been sailing for more than 10 hours by this point (already an hour longer than planned) with no final destination in sight just yet…

So with absolutely no idea about how much longer we had until our arrival to Bagan (and no inclination to try to find out!), we decided just to sit back, relax and enjoy the beautiful sunset views reflecting on the calm water of the Irrawaddy river. After all, when would we get this opportunity again.

The ‘golden hour’ seemed to last forever and the view just got better and better as we savoured the last few moments of the day’s sun. It was a fitting end to a magical journey. 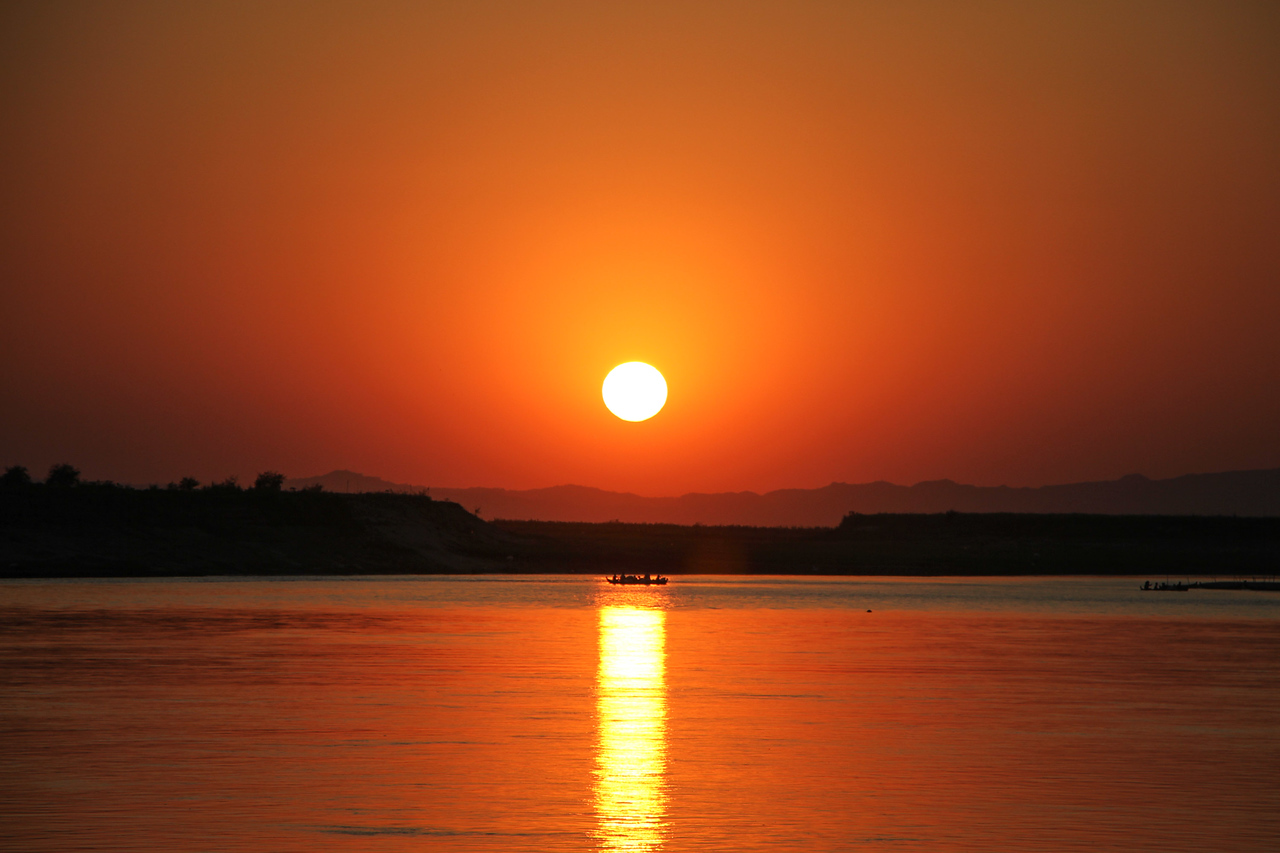 It was dark again when we finally reached Nuang U, the port of Bagan. We could just see a faint glimpse of the silhouettes of bell-shaped temples. A reassuring comfort that we were in the right place. Our boat slowed and carefully manovered sideways to slip alongside the wooden dock. A group of around 20 people were waiting for us, ready to pounce as soon as our gangplank was in place (oh no I’d forgotten about that extra challenge), offering their taxi services or some bag carrying for a few extra kyat. It was a little chaotic, exaggerated by the darkness and late hour.

Our journey had ended up being almost 12 hours (as opposed to the expected 9) so we were a little weary by now and keen to get off and find our way to our guesthouse. Unfortunately we hadn’t planned ahead as we normally would by arranging a pick up from our guesthouse, so we had to go through the taxi negotiation process. Not ideal given the probably desperate look on our faces and ratio of fewer taxi drivers to tourists. Our bargaining was somewhat weakened so we probably got a little ripped off, but hey we didn’t care much at this point and just wanted to get safely to our guesthouse.

It was around a 20 minute drive through Nuang U and Old Bagan before we reached finally reached it and our long journey was over. Delighted, we tipped our overpriced taxi and made our way in for a warm Burmese welcome. It was just the start of an awesome adventure around The Captivating Bagan Temples Of Myanmar. We couldn’t wait to explore this magical sacred place, but not before some much needed rest.

We took this journey with a company called Malikha River Cruises and arranged our tickets through our hotel in Mandalay. I believe there are a number of ferry companies offering this route (as well as even slower government boat options which are probably a little cheaper if you’re on a tight budget) however despite our journey taking longer than expected, we would happily recommend Malikha. We had comfortable seats, friendly service, simple but decent food and good toilet facilities. The boat was extremely relaxing too!

Or enjoy boat trips and looking to discover new inspiration? Take a look at our amazing experience cruising the stunning waters of the spectacular Bacuit Archipelago of El Nido in the Philippines and find out all our tips on El Nido Tours here.